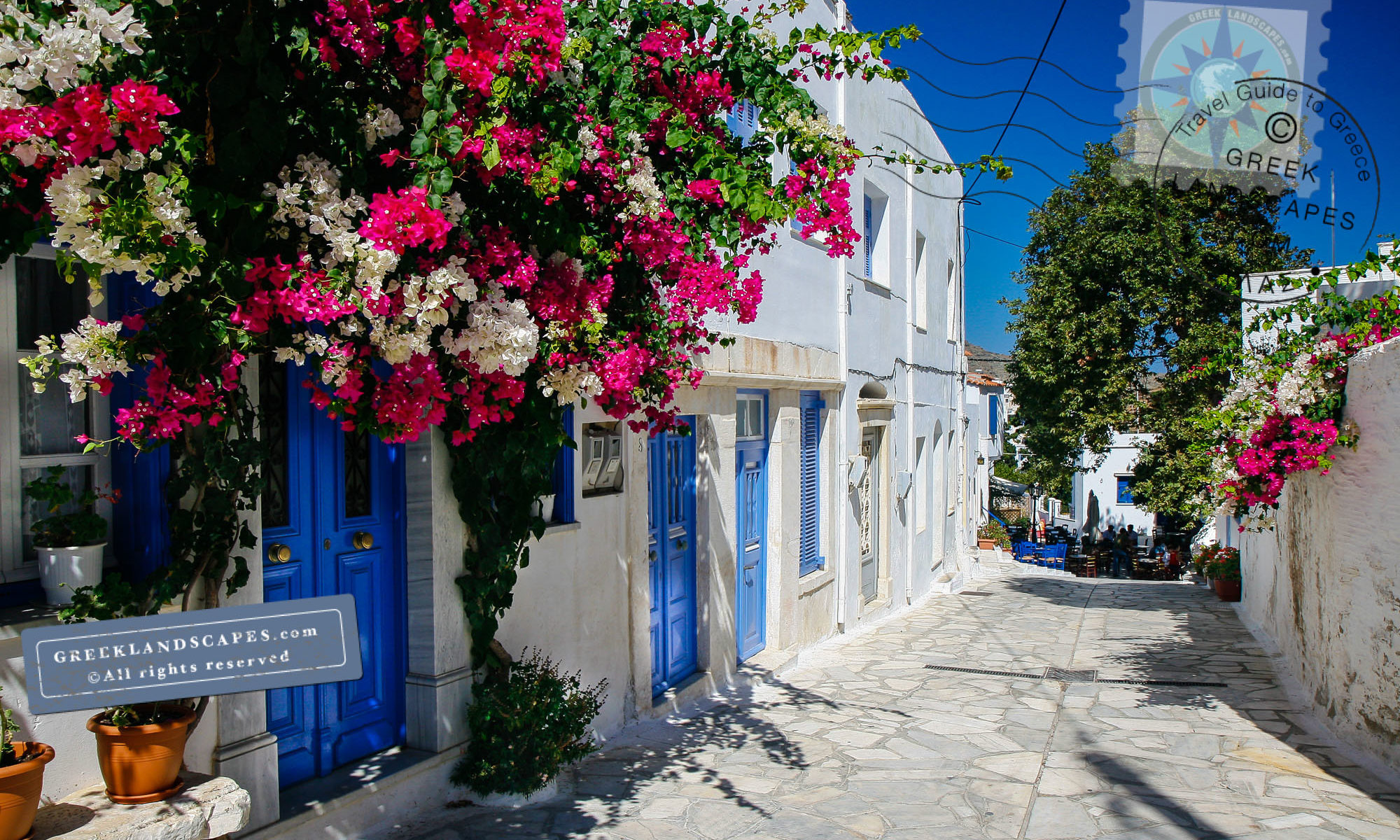 Tinos island is a magnet for Orthodox Christinas as a place of pilgrimage to the renown church of Panagia. This identity has kept the island under the leisure-tourists’ radar. But those who go, get to enjoy the genuine Greek island life outside the main town where unassuming villages and beaches still retain the traditional “sleepy” feeling of yesteryear.

A polite cat poses for a photo in Tinos island.

Panoramic view of Tinos town and its port

Tinos town is very charming if you walk a few blocks away from the main thoroughfare.

Volax village is renown for the dramatic round granite boulders. Tinos island, Greece.

Exhibit at the Museum of Marble Crafts in Pyrgos. Tinos island.

Tinos Town and its harbor.

The village of Perastra is one of many in Tinos island interior.

Tinos is known among Greeks mainly for the “Panagia Evangelistria” (Our Lady of Tinos) church. It houses an icon of the Virgin Mary which is widely believed to be the most able to perform miracles among several similar icons around Greece.

As such, Tinos flourishes under the constant influx of the faithful who make the pilgrimage to the island either to ask Panagia for a miracle, or as the recipients of a prior miracle that have a “tama” to fulfill. “Tama” (τάμα) is a promise for an offering in exchange for divine intervention.

The reputation of the island as the home of Panagia of Tinos icon and church is so strong that it’s hard to imagine that the island has anything else to offer.

But Tinos will surprise you. Once you move away from the tasteless artifice of the main town’s front, the island unveils itself in glorious beauty.

Countless little villages tacked neatly among the thick flora of ravines sprinkle a landscape filled with harsh rocky hills from end to end.

The blue waters of the Aegean embrace the island gently here, or with forceful waves there, in the process of shaping the coast into a carved relief sculpture as pretty as the famous Tinian fegites of the local marble artisans.

While Tinos can’t rival its close neighbor, Mykonos, in beautiful beaches, it has it own share of sandy swim spots. They are as accommodating as you will find in any other Aegean island.

Since most tourists prefer more glamorous destinations in the Cyclades, Tinos is a hidden gem if you yearn for something different, something relaxing, and something more authentic.

In the age of the internet, Tinos was not going to be a secret for too long. An increasing number of Athenians and other Europeans have discovered its charm, have began peppering the landscape with imitation “traditional” Cycladic vacation dwellings.

Where Tinos is different than most Greek islands is in the beautiful interior villages, its unique history and its artistic tradition.

Tinos has been a source of several varieties of excellent marble. The island landscape is scarred to this day from the countless quarries that produced fine marble, mostly used in architecture and sculpture since ancient times.

This tradition is visible in the building decorations, in the caving studios, and in the cemeteries, especially around Pyrgos town in the north.

Things to Do and See

Tinos Town and the Church of Panagia Evangelistria

At first glance, and after approaching Tinos by ferry, the town looks as if it lacks all the charm and luster that make the islands of the Cyclades such magnets for photographers and tourists from around the world.

You will probably form this first impression of the island from a few medium size unremarkable buildings–mostly hotels and fast food joints– that frame the nondescript promenade.

But first looks can be deceiving, and in Tinos’ case, they are.

Pilgrims Hoping for a Miracle

The crowds on Tinos streets are not made of the usual slick or joyful European tourists.

There are plenty of them of course, but most of the visitors you see in the streets of Tinos Chora are the spirited faithful, many of whom have made the pilgrimage as a matter of duty to their faith.

Many land on the island carrying the heavy burden of some personal tragedy, or in search of a miracle.

A good portion have saved money for months to make the trip, and many have left their warm bed to spend a night sleeping on the porch of the Panagia church.

Throughout Greece stories of actual miracles attributed to Panagia of Tinos circulate abundantly.

Many of the stories involve public spectacles of disabled persons walking, mute children talking, and similar miracles occurring as the result of being in the vicinity of the miraculous Panagia icon.

With cold eyes, it is just another kind of tourist industry–an ancient one that caters to those who have a sense of religious duty, and those who try to find hope for their ailments in the divine powers of Panagia after everything else has failed.

But there is a quiet beauty in that Tinos has not felt the need to accommodate the insatiable appetite of leisure or thrill seekers.

Tinos has been content to cater to the faithful, the poor, and people in need, offering an unimaginable experience to those who glide through the kitsch, glitter, and artifice, in order to fulfill their spiritual duty.

Pyrgos is one of the most charming towns in the Cyclades. It owes its beauty in large part to the rich tradition of marble-working and carving.

The marble artisans of Tinos were famous for their skill since ancient times, and it’s a tradition that is very much alive to our days in Pyrgos.

There,  you will find the Museum of Traditional Marble Technology, a respectful sculpture academy, and the Halepas Museum that houses artwork of Greece’s celebrated marble sculptor.

You will witness the exceptional craftsmanship of the local artists in its streets, and  especially in the cemetery. The carvings on the mable graves are exquisite, and many are over a century old.

Fegites are the semi-circular relief marble sculptures you see over doors and windows in countless houses in Tinos.

It’s a folk art tradition that decorates the openings above doors and windows with relief carvings.

The carvings usually have through spaces incorporated in the design so air and light may enter the house.

Their openings provide a light source for the interior, and elegant decoration to the outside of the house.

The granite rocks at Volax, village, are the source of legends and folklore. Tinos island, Greece.

Volax is one of the oldest established villages in Tinos island. It’s a lovely little village with typical Cycladic cubist houses, but its most striking attraction is the large round boulders strewn in the surrounding landscape.

The volcanic granite boulders are a natural curiosity, and a source of countless legends and folklore.

They are an attraction for both selfie-seekers and new-age spiritualists who are usually attracted to such unusual earth features.

While the nearby island of Mykonos is more famous for its beaches, Tinos is by no means deprived of excellent swimming spots.

The island is ringed by beaches. Some are easily accessible from Tinos Chora, but to reach the best ones you need wheels.

Click here to read our reviews and ratings of Tinos Beaches

With a car, tour the island’s interior and take in the landscape.

Tinos abandoned quarries and eroded stone-retained terraces remain as a silent witness to a prosperous past. The island’s wealth came from vigorous marble extraction and agriculture.

Most of the marble went to satisfy the insatiable appetite of the Athenians, and Europeans who used the bluish, gray, or green stone to adorn their residences and public buildings.

Even up to the last generation, the islanders toiled the rocky land, and made their living mostly through agriculture.

Many still do today, but the rise of the tourist industry led to the abandonment of the terraces. They now cascade down the hills and mark the land like earth waves.

The Fountain at the sanctuary of Poseidon and Amphitrite. Kionia, Tinos.

The ruins of an ancient tower at Smovolo. Tinos, Greece.

Amphorae and pithoi at the Archaeological Museum of Tinos island. Greece.

Ancient ruins abound all around Tinos. Some of the best known sites include Kiona, and the Vryokastro prehistoric acropolis.

Lesser known ancient ruins include Smovolo tower in the south, and a Mycenaean Tholos Tomb in Marlas. Both are only worth visiting if you are an archaeology buff.

Kionia Temple of Poseidon and Amphitrite

The best preserved, and well known archaeological site of Tinos is the Temple of Poseidon and Amphitrite at Kiona.

It’s within easy reach, just north of Tinos Chora. Kionia is a small site, with mostly building foundations visible through the overgrown vegetation.

The sanctuary was founded at the same time as the ancient city of Tenos, between the 4th and middle of 3d c. BCE.

The sanctuary began its decline beginning with Roman rule after 88 BCE. But after the 1st c. CE it enjoyed a second golden age, with new construction projects that included baths, statues, and inscriptions.

After two centuries of fame, it was abandoned around 250 CE.

The prehistoric acropolis at Vryokastro hill is at the end of Agios Fokas beach, south of Tinos Chora.

It is open to everyone to visit, but it’s hard climbing through the rubble. But if you do go through the trouble of hiking to the top of the hill through the ancient ruins, you will be rewarded with beautiful views.

There is not much the untrained eye can discern in the visible ruins, so go if you are a hardcore ancient buff, or just for the exercise.

The Archaeological Museum of Tinos is a small building, with an interior courtyard. It exhibits important artifacts from ancient Greek and Roman times.

It is located right on the main road that leads from the port to the church of Panagia.

History: The Sinking of Elli

The island of Tinos has enriched the history of Greece with stories of folklore, dramatic historical events, and artistic wealth since the Bronze Age.

One of the most dramatic Greek historical events took place on August 15, 1940.

This is when the Italian submarine Delfino torpedoed the Greek light cruiser “ELLI” as it was moored in the island’s harbor during the height of the Panagia festival. The attack came during peace time, with no warning or provocation.

Thousands of the faithful who were gathered for the Panagia icon procession watched and mourned as the explosions sent nine sailors to their watery death.

The event pushed Greece closer to conflict with Italy and the eventual joining of WWII on the side of the allies.

A monument to the horrific fate of the cruiser and its crew is prominently displayed on the harbor of Tinos town today.

August 15 is one date when the island is in danger of sinking under the weight of the pilgrims who flock to the church by the thousands.

If you are interested in just visiting the island for its natural beauty, or to relax, August 15 is definitely the time to avoid.

On the other hand if you want to experience the gritty anarchy of religious processions, then by all means try to squeeze among the faithful during the Panagia festival.

A good time to visit Tinos is after mid-September when the weather is still agreeable and the crowds have departed, leaving the island in peace and quiet, and the prices a bit lower. Swimming will be hit or miss during that time though.

From Tinos, you can comfortably go on a day-trip to nearby Mykonos (only twenty minutes by catamaran). In Mykonos can visit Delos archaeological site and museum, or you can enjoy swimming in one of its famous beaches.

Similarly, Tinos has good ferry connections with Syros, and less frequent ones with Andros to the north.