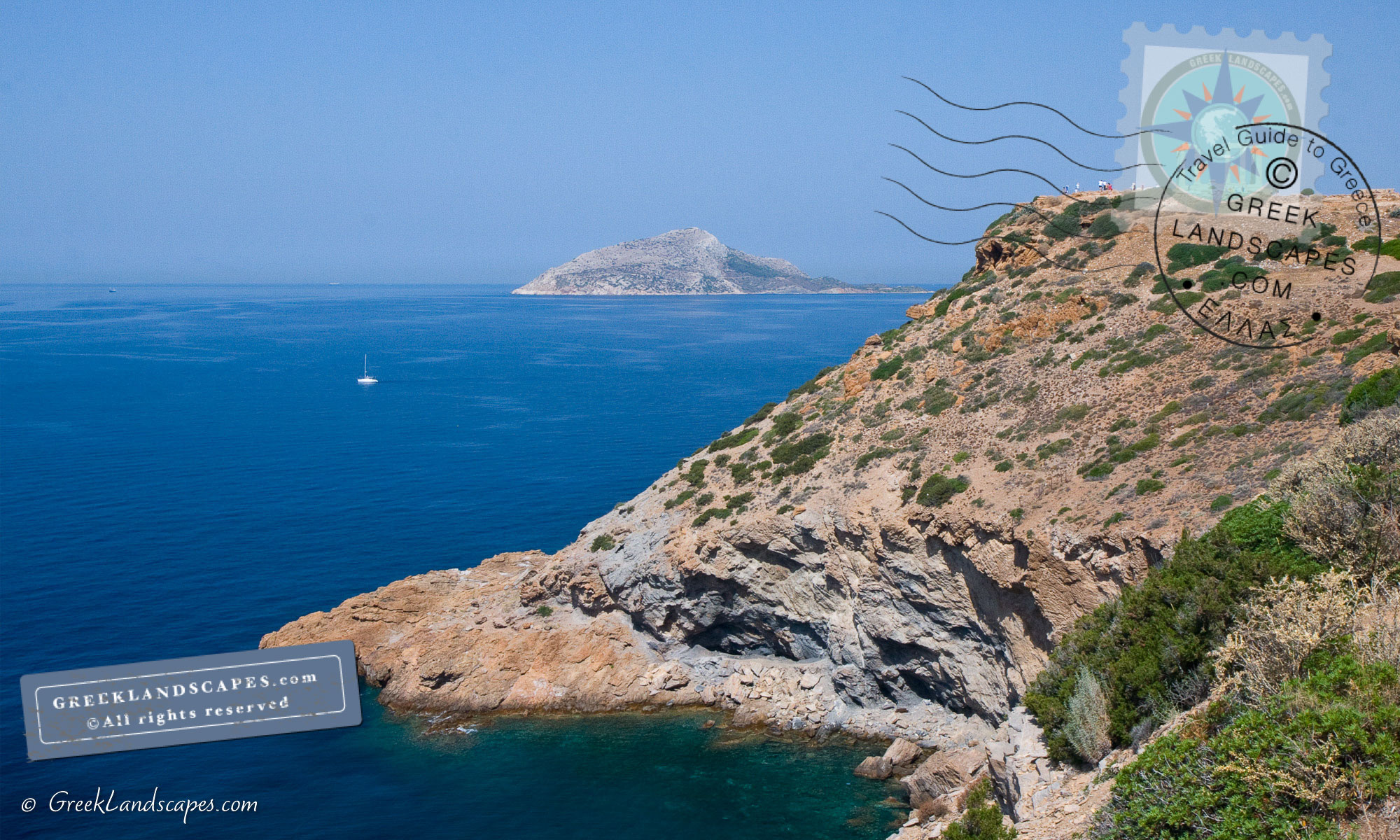 The Temple of Poseidon at Sounion is a popular archaeological site to visit near Athens. The temple as well as the setting is beautiful, and many visitors choose to go during sunset hour.

The temple of Poseidon at Sounion

Panoramic view of the Temple of Poseidon and the sea

Sounion beach with the Temple of Poseidon above

The Temple of Poseidon (Ναός Ποσειδώνος) is the most prominent monument at the archaeological site of Sounion, in southeast Attica. It’s about an hour drive from Athens, and it’s a beautiful site to visit while there.

The Doric temple was constructed in the golden age of Athens. It was part of the ambitious building project that included such classical monuments as the Temple of Athena Parthenon (the Parthenon) at the Acropolis, and the Temple of Hephaestus in the Agora of Athens.

Sounion promontory had great significance for ancient Athenians, both as a place of worship, and as a strategic outpost that controlled the sea traffic to and from Athens. Therefore, it was fortified with walls and had a permanent garrison of triremes stationed there.

The site itself is beautiful with the Temple of Poseidon crowning the abrupt promontory that jets into the sea, resembling a ship bow that cuts through the Aegean sea waves.

It was a beacon and assurance of approaching safe harbor for sailors who navigated towards Athens and a sign of farewell for departing ones.

You can imagine what a sight it must have been when the ancient Greek seafarers laid their eyes on the majestic Temple of Poseidon at the very tip of cape Sounio.

There must have been no better reward for sailors who braved the waves of the Aegean archipelago than the view of the orderly marble columns gleaming atop the rugged rocks that form the cape of Sounio.

The temple of Poseidon has stood silently for thousands of years as a reminder of respect for mighty Poseidon and his capricious ocean.

The temple’s proportions are humble and serene, and yet the structure is elevated in a showmanship manner through the massive foundation that raises it so it can be easily spotted by sailors from afar.

While most of the ornaments have been removed, the Doric columns impose a statement of strength, durability and serenity on the entire landscape.

The aesthetics of the temple communicate a message most appropriate and welcome for those who braved the ocean in small vessels at the mercy of Poseidon’s desires.

Cape Sounio has been recognized since prehistoric times as a special place of worship, and was an important sanctuary during the Greek Archaic, Classical, and Hellenistic periods.

The location of cape Sounio at the tip of Attica rendered it as a location of strategic military importance, and thus it was fortified with a mighty wall and guarded constantly by a garrison which ensured that the shipping lanes to Athens remained open.

The ruins you see today date back to the glorious classical era of ancient Greece, the 5th century BCE.

The temple of Poseidon was built in 444-440 BCE, and It was part of the ambitious building project of Perikles that included the Acropolis of Athens and the Hephaesteion in the Agora.

Prior to that, there was an Archaic temple on site, and some of its columns were recycled in the new temple. It was probably destroyed by the invading Persians in 480 BCE.

Between 413 and 412 BCE, during the Peloponnesian War, the Athenians built a defensive wall around the temple. It enclosed the two stoas and several residential buildings.

The Macedonians reinforced the fortifications and added ship sheds for the triremes in the 3d century BCE, but the site fell into decline soon thereafter.

Sounion promontory is thought to be the place where Aegeus, father of Theseus, plunged to his death after he glimpsed the dark sails of Theseus’ ship approaching. Legend has it that the Aegean Sea took its name from this act.

The promontory that’s home to the Temple of Poseidon is surrounded completely by the blue sea (except the north approach to the site), and it’s perhaps the only site where one can really comprehend the importance of seafaring in ancient Greece.

The ruins as we see them today are the result of renovations that took place during the 5th century B.C., and replaced a succession of buildings that date back to the archaic period.

The temple atop the hill was visible for miles from the sea and signaled to approaching ships that they were entering a place of culture, power, and prestige.

It is a Doric, peripteral structure with 34 columns (6 at its ends, and thirteen on each long side). It has a double-stacked terrace at its foundation, a peristyle, a cella, a pronaos, and an opisthodromos. The majority of the building is made of mable quarried from nearby Agrileza.

The temple had no decorations on the metopes, but had a shallow Ionic frieze on the architrave of the pronaos. It was carved in Parian mable.

The columns diverge from the norm for Doric temples in that they have 16 flutes instead of the usual 20.

Similarly, the pediment’s cornice diverged from the norm by having a pitch of 12.5° (instead of the usual 15°). It was decorated with sculptures, all of which have not survived to our day.

The temple of Poseidon has been the ground for countless graffiti artists throughout the centuries, and a favorite topic of tour guides is to point out the graffiti location of famous persons like Lord Byron.

Besides the Temple of Poseidon, there are a few other ruins of visual interest on the promontory.

You will see the remnants of the defensive walls and traces of ancient building foundations.

You can also observe the dock that was partly cut out of the rock below the west cliff, but there is no trace of the two roofed slipways that sheltered and kept the garrison’s triremes dry (a 3d century addition).

The Temple of Athena Sounias

On the low hill to the north, you will see the Temple of Athena Sounias. The site is in complete ruins, with few building foundations and scattered marbles betraying that it was an important site of worship.

That Temple was built in 470 BCE to replace an earlier, Archaic building. In the 1st century CE many of its parts were shipped to Athens where they were repurposed in the Ancient Agora of Athens. You can see two beautiful Ionic capitals in the Agora Museum.

A second, smaller temple on the site is associated with either Artemis or the hero Phrontis.

But these archaeological sites are not just for study. It’s ok to take off your scholar hat and be a child again.

Stop and take in the view from the temple of Poseidon looking south.

The horizon is full of sea three quarters of the way, and a few meters away the rock dips and disappears towards the smashing waves below. You can’t help but feel as if the whole rock is just a floating platform.

You can easily imagine yourself on a massive raft which detached itself from land and time, now floating softly along the waves towards the expanse of the Aegean Sea and the depths of history.

You have joined Poseidon and are on a journey of discovery!

Visiting The Temple of Poseidon at Sounion

Sounion is about one hour drive from the center of Athens. The drive is comfortable once you get to the Attiki Odos.

On site, there is one restaurant with a good view of the temple of Poseidon, and one smaller store that sells knickknacks, souvenirs, and bottled water.

Best time to visit is early in the morning, before 10:00 AM. At this time the sun is low on the horizon and the bus loads of other tourists are still eating breakfast at their hotels.

After 11 AM, the summer sun can be a real challenge to deal with on top of the barren hill that offers no shade.

From the parking lot, an uphill path will take you through the restaurant to the archaeological site where you can buy your ticket at the entrance. Right before sunset, the parking lot gets filled quickly so you might have to park precariously on the approaching road.

In terms of amenities, there are none on the archaeological site itself. If you need a rest room, you need to exit the site and use the souvenir shop’s facilities (about 5 minute walk from the temple). There is no water available, so bring your own (at least two small bottles in the summer) and don’t count on the souvenir shop to be open if you go before 10 AM (the restaurant will not sell water to tourists unless they sit at a table).

There is a decent beach below the hill, on the west side of the bay in front of a hotel. To get to it you have to go through the hotel, but it’s open to all.

If you are interested in ancient history, visiting the site of the Temple of Athena Sounias is worth the short walk from the temple of Poseidon. Otherwise, you can safely skip it, because ancient artifacts are scant on the site.

The entire Temple of Poseidon is very inspiring with the harmonic combination of sea, sun, and ancient ruins. It bring the whole package of “Greece” together in one view (or photo), so most package trips to Athens include a “sunset dinner” at Sounio either as part of the package or as an additional excursion.

Visiting the Temple of Poseidon during sunset in August is actually a nice exclamation point best saved for your last night in Greece.

Click here for the Sounion hours and ticket information