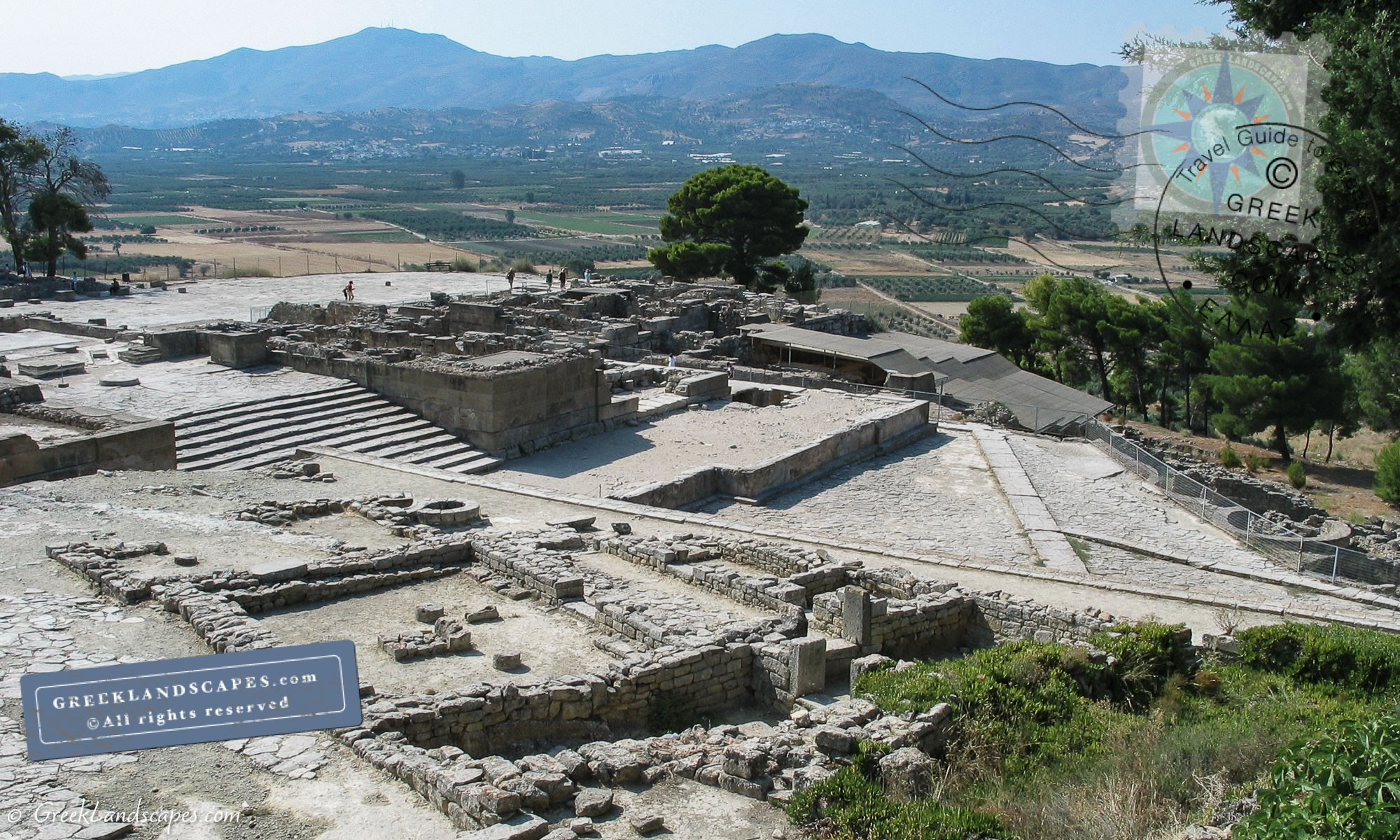 Phaistos is the second largest Minoan palace of Crete. It is located on a hill with excellent views of the fertile lands below. As nice as the view is from there, the palace buildings themselves comprised arguably the most beautiful of all the Minoan palaces.

The second largest palace of Crete, Phaistos is located in a spectacular setting. The buildings atop a rocky hill overlook the entire Messara plane and the Asterousia mountains to the South, and the Lasithi mountains to the East.

To the west one can see the Messara gulf, while the imposing Mt. Idi or Psiloretis towers over the site to the North.

The ruins span several Minoan eras, and one of the most challenging, and interesting activities for the visitor is to explore which parts are from the Proto-Palatial and which walls have stood since the Neo-palatial periods.

The conversion of the three grand staircases in Phaistos.

The large triangular square in Phaistos

Phaistos palace has excellent views of the fertile Messara plain below.

The Archaeological site of Phaistos

While Phaistos has a main court like every palace of Minoan origin, the area around the West court sets Phaistos apart from the other sites of Crete.

Two main staircases, one grander than the other converge on the North end of the West court to complement with their presence the extended step-like design of the theatrical area.

The architecture of Phaistos is more simplified compared with Knossos, and it is built in an orderly arrangement that refers to a single architect.

The building outlines and the ground plan is easily deciphered by the visitor at first glance, however further examination reveals the complexity built into the site over hundreds of years of destruction and rebuilding cycles.

The complex of architectural elements is a delightful amalgam of the old and new palace structures.

During the rebuilding of the palace in 1700 BC several of the rooms from the old palace were retained in the new building, and archaeologists today have excavated several areas of the new palace to reveal the older structures below.

The pavement of the west courtyard along with the few bottom steps of the converging staircases have been exposed during modern excavations, for they were buried one meter deep when the new palace was built.

The view of the Messara plain to the South, and the imposing mt. Idi to the North provided the perfect frame for the alternating landscape of the palace itself with its tranquil level courts, and the building masses which rose from the ground.

It is as if the architects of the palace were trying to imitate the landscape around them with their design, providing architectural metaphors for the flat plain and the rugged rising mass of mt. Idi.

The main court and the west court are separated by the orderly masses of a multitude of rooms which functioned as storage magazines, living quarters, artists’ workshops, and shrines.

The so called royal quarters were less impressive than the ones found at Knossos, but then again, they have not been subjected to much restoration either.

The interweaving of Neolithic, Minoan, and Historical structures is the most exciting aspect of the walk through the ruins.

The harmonious coexistence of the different historical eras provided a unique perspective of the complexity of human existence through time.

Phaistos provides an organic structure of human activity through prehistory. It is not a mere snap-shot of a historical time, but rather it can be perceived as a film with multiple plot twists which constructs a concrete, yet elusive story.

While all archaeological sites can be seen in these terms, Phaistos seemed to me to transcend time in a more unique matter.

After the palace’s destruction in 1700 BCE the rebuilding process took care to preserve as much of the old palace as possible, and all new construction congruously complemented the older structures.

You can easily imagine the awe of first-time visitors during neopalatial times who after entering the palace, descended an imposing staircase to find themselves confronted with a monumental flight of stairs which they had to climb before entering the maze of rooms.

One of the most impressive features of Phaistos is the West court which is formed in an almost triangular shape and is framed to the north and southwest by the imposing theatrical area and the mysterious koulouras respectively.

But what makes this court so much more exciting is the raised walkways which partition the court roughly through the center. It is tempting to imagine their function, especially since it is next to impossible to know their actual function during Prepalatial times — and this of course is a main reason for the magnetism they emanate to the visitor.

The site is about one hour drive South of Heraklion, and within easy reach of the famous beach of Matala, and the Roman capital of the island in Gortyn.

The nearby resort town of Agia Galini is a good place to stay if you want to visit the above places.

It’s an easy site to walk through. The scattered pine trees provide enough relief from the sun at regular intervals through the site.

You can stroll leisurely through Phaistos ruins in about one hour.

Click here for the ancient Phaistos hours and ticket information

Click to open the aerial view and to get directions in a new window.