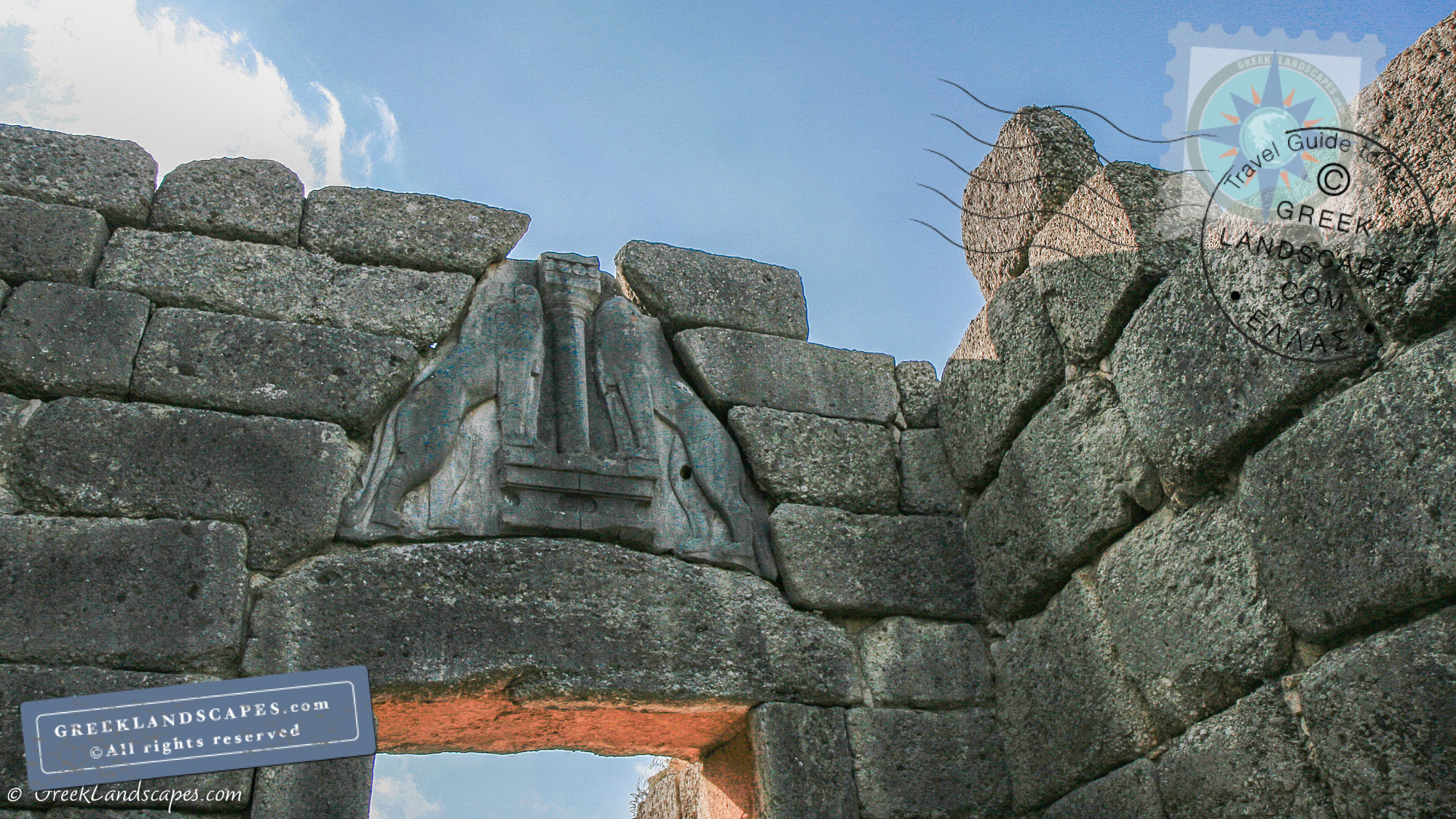 Mycenae is one of the most important Bronze Age archaeological sites in Greece. It gave its name to the Mycenaean civilization, and as Homer tells us in the Iliad, its king, Agamemnon, led a thousand ships to conquer Troy.

The ancient citadel of Mycenae (Μυκήναι, Μυκήνη) is located in the Argolis, Peloponnese, in Greece.

Ιt is an imposing site atop  a rocky hill which is fortified by “Cyclopean” walls to protect the palace and other important structures of the Mycenaeans.

The defensive walls were called Cyclopean by the ancients who believed only mighty Cyclops could have lifted such large stone blocks in place.

Mycenae’s strategic location allowed it to control commerce between the Aegean and the mainland. Naturally, it grew over a period of a hundred years (1350-1200 BCE) to one of the richest and most powerful mainland centers of Bronze Age Greece.

Mycenaean culture is a rich source of ancient epics and legends. Among others, the dynasty of Atreids, the labors of Hercules, the Trojan war, the Thyestian Feast, and Agamemnon’s tragic life and death, are rooted in the Mycenaean era.

The 19th century excavations at Mycenae re-wrote the book on Ancient Greece and spawned a flurry of interest in archaeology.

In 1876, Schliemann unearthed a plethora of spectacular artifacts, many of which were made of gold, and established for the first time that the Trojan war was not fiction, but a historical event.

The richness of the archaeological site led scholars to name the entire late Bronze Age era in Greece “Mycenaean”.

The Lion sculpture above the main gate is the earliest known monumental sculpture in Europe.

The entrance to the citadel of Mycenae is an imposing site with the massive posts and lintels, and with the Lions sculpture above.

Grave Circle A inside the Mycenaean citadel

Only the foundations of the palace at Mycenae are visible today

The ruins of the Mycenaean Acropolis are a delight to visit, if you disregard the uphill hiking to reach the palace.

The awe inspiring “Lion Gates” is the earliest known piece of monumental sculpture in the European continent. The sculpture crowns the main gate to the citadel that’s protected by a defensive wall that surrounds the top of the hill.

Immediately to the right after you enter the citadel you will see the impressive Grave Circle A that contains six royal shaft graves. This area yielded some of the most spectacular funerary objects ever unearthed in Greece.

Today you can see the ancient artifacts at the  National Archaeological Museum of Athens. They include the famous gold death-masks, bronze weapons, every-day objects, and jewelry.

Beyond the grave circle, all that remains today of the acropolis are the building foundations and the immense wall that crowns the top of the hill. Informative signs with brief descriptions and diagrams will give you a good idea of each building as you progress.

After you pass the Grave Circle A, a steep path leads your climb through several ancient buildings and pathways, towards the palace at the top. As legend has it, Agamemnon was murdered there by his wife Klytemenestra and her lover after he returned victorious from the Trojan war.

Following the foot path, you will pass a host of supporting buildings, artisan’s workshops, and storage rooms behind the Palace, before you reach the underground cistern at the NE end of the citadel.

There, you can descent the precarious staircase to reach the underwater cistern. The tunnel is dug at a steep angle, and is supported by an impressive corbel-arch above.

The underwater cistern tunnel is pitch dark, but that doesn’t stop the multitude of visitors who tread down the stairs gingerly with their cellphone flash lights. At the bottom there is only a dry landing pad today.

From there, you can return to the gate via the same route, or you an exit through the Northern Gate and take the foot path to the Mycenae Museum.

It’s easy to go to Mycenae and miss all the important sites that exist outside the walled citadel if you follow the crowds.

On the west foot of the citadel, opposite the ticket kiosk, you will find Grave Circle B.

Despite its name, it predates Grave Circle A by a few hundred years. It’s not as impressive a sight, but it’s just as important because it sheds light to the early days of the kingdom.

A little to the east, the so called, Tholos tomb of Kleitemnystra is well preserved–albeit a later Roman theatre cuts through its entrance way (the Dromos).

Nearby, the Tholos tomb of Aegysthus has it’s top missing, and so does the Lions Tholos tomb near the museum.

The Treasury of Atreus

The Treasury of Atreus, otherwise known as “Tomb of Agamemnon”, is a tholos tomb that was built 1350 – 1250 BCE. It is a monument of impressive size and exquisite masonry work.

It has monumental entrance and a small side-chamber to the north of the main  hall. As you enter, don’t forget to marvel at the massive lintel (the horizontal top of the door frame), and how perfectly the stones fit and rise to the apex of the tomb.

Despite its name, no treasures were found in the tomb because it was pillaged in ancient times.

The Treasury of Atreus is a few minutes walk on the main road from the parking lot, but you might opt to drive (there is a small parking lot there) at the end of your Mycenae visit. You can enter with the ticket you bought at Mycenae.

Don’t neglect to visit the little museum to the north of the citadel. Its exhibits include many important artifacts and thematic educational groupings that shed some light on life and commerce during Mycenaean times.

As we mentioned before, you can see the most spectacular artifacts from Mycenae in the National Archaeological Museum of Athens.

Legend has it that Mycenae was founded by Perseus himself.

At the time, other major kingdoms in mainland Greece included, Athens, Sparta, Orchomenos, Pylos, Knossos, Thebes, Gla, and the nearby Tyrins.

With its military and economic power, Mycenae dominated mainland Greece first, before overwhelming the more ancient Minoan civilization in Crete and the Aegean islands.

The artifacts unearthed at Mycenae show extensive commercial exchange with the entire Mediterranean, Asia Minor, the Levant, and Egypt.

Mycenaeans traded mainly oil and ceramics, while they imported tin and ivory. With the imported raw material they manufactured weapons which they exported in turn.

With their powerful army and navy, they also engaged in mercenary wars and piracy.

A plethora of Linear B tablets found in excavations indicate that Mycenaeans had a robust bureaucracy that supported a complex hierarchical society.

These Linear B tablets prove that the Mycenaeans were “Greek” beyond doubt.

The end of Mycenae coincided with the abrupt end of all the other Mycenaean centers (with the exception of Athens) in the middle of the 11th century BCE.

We don’t know what caused this sudden decline of such powerful civilization, but several theories have emerged. One blames the Dorian tribes that seem to have migrated south from northern Greece, while another theory points to internal strife and social upheaval.

Naturally, the Sea People, a mysterious group that ravaged the Mediterranean sea ports at that time, have been associated with the Mycenaeans. Some scholars believe that Sea People did the destruction, while others think the Mycenaeans became the “Sea People” after they were displaced from mainland Greece.

The highway from Athens to the Mycene area is new and well maintained. Drive towards Nauplion and follow signs to Mycenae.

Even the most hasty site tour will take you about an hour. Two hours should be sufficient to tour the site leisourly.

Once there you will find that Mycenae is a challenging site to navigate.

Be prepared for a steep climb through the ruins, and to endure the relentless sun rays if you are there in the summer after 10 am. There is not much shade inside the walls.

Also, once you go past the ticket booth there is no place to buy water or a restroom anywhere inside the citadel.

There is a shop, communal bathrooms, and a water spigot near the museum.

The only place for food is a food truck in the parking lot across from the citadel.

So, wear sturdy shoes and a hat, and don’t forget to get hydrated before you enter the lion gates.

In the summer, it’s always best to climb through the ancient ruins first and save the museum visit for the hotter part of the day.

Around 10:00 AM an armada of tour busses unloads an incredible number of tourists. After that time, finding parking becomes harder and the ticket counter lines grow exponentially (in the sun), so if you get there earlier you will have a much more comfortable visit.

Click here for the ancient Mycenae hours and ticket information

Click to open the areal view of Mycenae and to get directions in a new window.