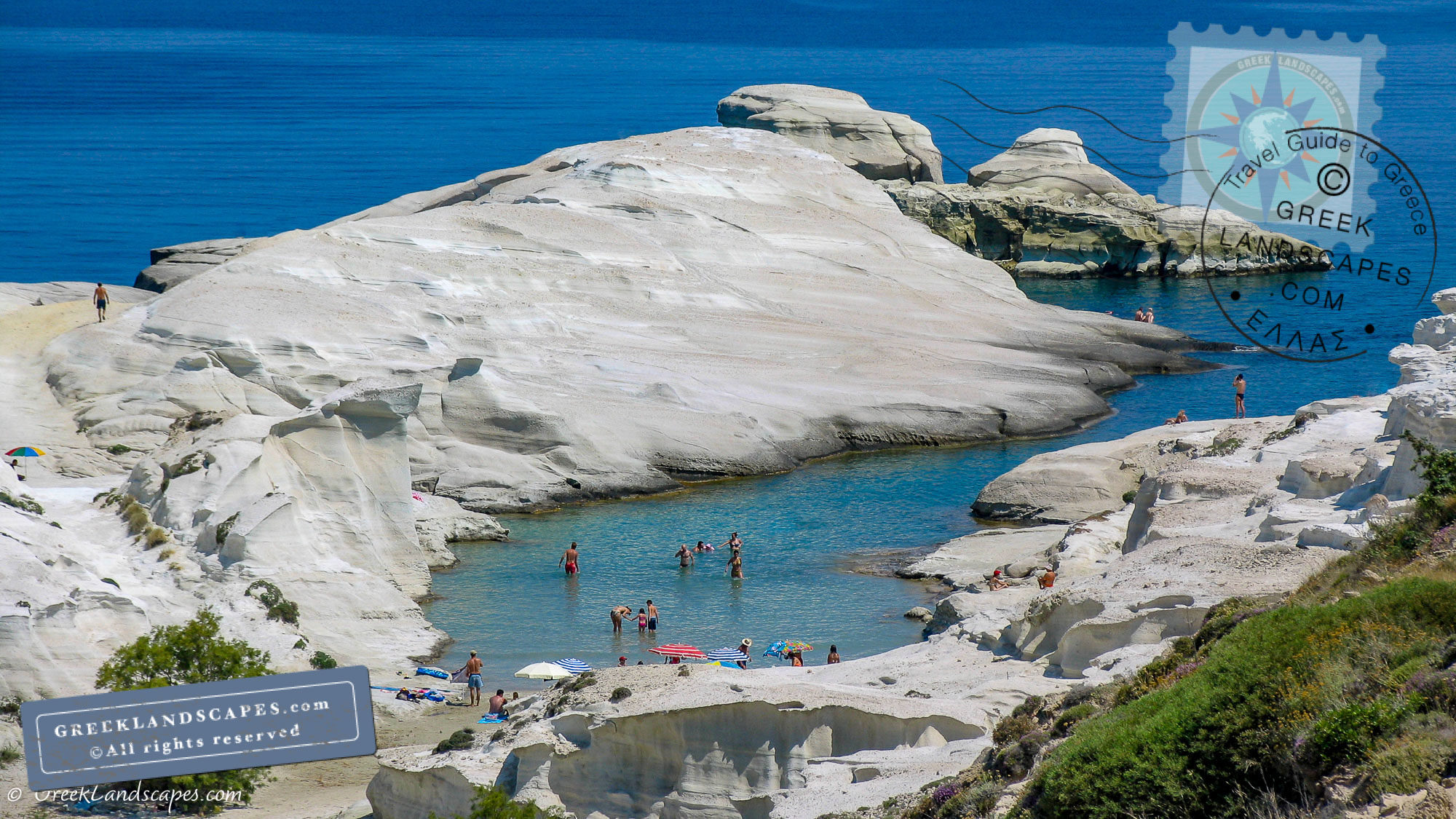 The island of Milos, along with the rest of the western Cyclades is a favorite destination of Greek vacationers. They go for the unique beaches, and the small towns that never feel crowded.

Brave souls dive from the rocks in Sarakiniko beach. Sea caves and a wreck complete the scene. Milos island, Greece.

Alogomandra beach is not as well known, but it is well worth a visit.

Sarakiniko is the iconic beach of Milos island. Greece.

One of several swimming holes in Papafragas, Milos island.

The shipwreck gives an extra dimension to the soft, wind-carved shore at Sarakiniko. Milos island, Greece.

Tsigrada is one of the best beaches in Milos.

Milos island is located in the west Cylcades, in the Aegean sea, about 83.4 nautical miles southeast of Piraeus.

The island was built through successive volcanic eruptions that deposited rich layers of minerals. After millions of years, volcanic activity formed the distinctive shape of the island that looks like it is divided in half by a large bay, the Milos Bay.

What distinguishes Milos from the other Aegean islands is its colorful landscape that has been sculpted by the wind into unique formations.

In terms of tourist infrastructure, the island is largely underdeveloped. The main settlements are concentrated on the north and east coast of the island, with the rest left into a raw state.

The largest towns are Adamas, Plaka, and Pollonia, while other tiny settlements and vacation villas dot the rest of the island.

You will find the real charm of the island in the remote little town of Fyropotamos, and the unique coastal landscapes like Sarakiniko and Kleftiko (the latter is accessible only by boat).

Today Milos is an island with two distinct personalities. Its rich mineral deposits have attracted enough investment for mining, while its unique volcanic landscape attracts a great deal of summer visitors.

Most visit Milos for its beaches and seascapes.

Beyond the excellent beaches and the unique coastal landscape, Milos is an island best suited for those who enjoy the quiet and slow pace of a Greek island.

The inaccessibility of most of the southern coast is also an attraction for young hikers who search for deserted sandy beaches to spend the day.

Even though Milos is considered a getaway for younger crowds, you will not find wild parties, and the island is positively family friendly.

In opposition to the development of the mining companies that have scraped just about every corner of the island, the tourist infrastructure seems to be in early development throughout.

Nevertheless, the landscape and the beaches more than make up for any tourist infrastructure deficiencies, and in the end they are the reason so many Greeks choose Milos Island for their vacation.

Adamas is the main port of the island, and all ferries use its peer to load and unload passengers and cars.

It is a small town and life on its streets revolves around the promenade where a multitude of restaurants, cafes and bars line the promenade.

This is also the departure point for all the one-day cruise boats that sail each morning for a slow circumnavigation of the island.

These cruises are a great way to experience the unique coastal landscape of the island that is normally inaccessible by land.

Plaka is a conglomerate of small villages joined together around a steep hill to the north of Adamas. It also happens to be the island’s capital.

It is a picturesque place with charming pedestrian streets, whitewashed houses, and excellent view of Milos bay.

Many visitors choose it as a place to stay for their visit, and the town comes alive late in the evening when just about every restaurant and pub is filled to capacity.

If you are looking for things to do in Milos, you may consider visiting the archeological site. The famous Venus de Milo statue was unearthed there.

The original marble statue is in the Louvre Museum in Paris, but you can catch a glimpse of a plaster copy at the Archaeological Museum in Plaka.

Pollonia must have been a very charming little village many years before.

Today it has been transformed into a busy summer vacation place. Many Athenians maintain a summer home there, and at the same time it has seen extensive hotel and apartment rentals development.

While Polonia itself retains a bit of its old character, the development of rental room construction has transformed the eastern end of the Pelekouda peninsula. The fast construction of nearly identical apartments has turned the place into an architectural desert.

Pollonia has a quiet, gently-slopping beach, and a very charming small promenade lined with restaurants.

Overall, the town feels very tranquil and that’s the reason many European families with children choose it for their holiday.

Firopotamos is a charming little fishing cove, nestled a little to the east of Plaka.

It is a sleepy place with a decent beach and fantastic sea water to swim in.

Definitely worth a visit, although finding room accommodations might be tough unless you make reservations well in advance.

The Beaches of Milos

The wind, the waves, and the rain have carved some incredibly charming and unique landscapes around the coast of the island.

In Milos, you don’t have to look very hard to find nice beaches nested in spectacular landscapes that will make your “selfies” pop.

The swimming holes of Papafragas and Kapros are just off the main road to Pollonia and are very often visited by motorists who stop for a snapshot or a quick dip in the waters.

The most famous beach of the island is the one at Sarakiniko where the soft limestone has been carved smoothly by wind and water to form a beautiful sculptural landscape.

Sarakiniko is packed with bathers and snorkeling people every day of the summer, and it, along with Kleftiko, must be the most visited sites of the island.

While Sarakiniko is easy to reach by road about fifteen minutes to the north of Adamas, Kleftiko is only accessible by boat. It is the highlight of the day-long cruises that leave Adamas every morning and circumnavigate the island.

Is sandy beaches are your passion, Milos will not disappoint. Paliohori, Hivadolimni, and Firiplaka are excellent choices.

Click here to see our reports and ratings from Milos beaches

The archaeological museum in the town exhibits some interesting artifacts from the excavations around the island, and a replica of the Venus statue.

The Neolithic town that is been excavated at Phylakopi (also transliterated as Philakopi) is an important archaeological site located near Papafragas.

Besides the imposing remains of the town’s wall the rest of the site is of little interest to all but the most hard-core archaeology buffs.

Artifacts from the excavations are exhibited in the Plaka museum, and the most important ones can be seen at the Athens Archaeological Museum.

The archaeological site of Plaka is a large area to the west of the town with few foot paths suffocating under the overgrown vegetation.

The ancient features there consist of the imposing defensive wall of the town, and a well preserved picturesque theatre that has the western shore as its backdrop.

In the Archaeological site of Milos you can visit the spot where the famous Venus de Milo was unearthed.

There is not much to see there, besides a rather dull sign that marks the spot next to the ancient wall where the famous statue was found.

The marble statue is now a main attraction at the Louvre Museum in Paris, but you can see a plaster copy at the Archeaeological Museum of Milos.

The Catacombs of Milos is the largest communal cemetery of the early Christian Age.

After you pass through the utilitarian entryway, you will find three galleries which were carved in the porous volcanic rock. From each main gallery, smaller ones branch out.

The galleries have variable dimensions, ranging between 1-5 meters wide and 1.6-1.5 meters in height.

The walls of the Catacombs were carved to resemble archways, and are lined with “arcosolia”, the recessed rectangular funerary chambers.

Some arcosolia have painted decoration consisting of red borders, with the drum painted a deep blue color. Only traces of the color survive today. In addition, they were decorated with inscriptions with the names of the deceased.

The Catacombs were both a cemetery and a place of worship. A large piece of rock in the middle of gallery B was used a altar.

Unfortunately, today only a tiny part is accessible to visitors. So small in fact to feel disappointing after traveling all the way there to see a small, almost featureless room.

According to archaeological evidence the island was inhabited in the early bronze age (around 3000 BCE), and it is best know in historical times for its destruction by the Athenians who during the Peloponnesian war found the Milean neutrality objectionable.

Milos, just like the neighboring Santorini is a volcanic island but its geological history is much gentler than Thera’s.

Milos did not suffer a catastrophic eruption but instead it was formed in successive deposits of volcanic material that was layered over time to form the island.

The volcanic activity of the island is first traced to 3.5 million years ago when the island was still underwater, and continued with various degrees of violent eruptions.

The most recent eruption has been dated to 205 CE. According to the “Geological Companion to Greece and the Aegean”.

These volcanic deposits are rich in minerals, and therefore it is no surprise that humans have been mining the island since antiquity.

Obsidian dated to the Mesolithic era was found at the Franchthi cave in Arcadia, and is believed to have come from Milos.

This exchange of goods with the mainland shows that Stone Age inhabitants of Milos engaged in maritime commerce, at least with the nearby lands.

The best time to visit Milos is in the summer between late May and early September. The island does get more crowded in August, but so does every other island in Greece.

Milos is connected to Piraeus with daily high-speed and conventional ferries.

Conventional ferries take about 7.5 hours to reach the island, while high speed ones cover the distance in about 5 hours.

There is a small airport just outside of Adamas that receives flights from Athens.

What, Where to Eat

When in Milos, try some the local “pitadarkia”, cheese pies with feta (they are mad with mitzithra in Crete), and the “domatokeftedes”, the deep-fried ‘tomato’ croquettes.

You will never be too far from a fish taverna, so try Cattle fish on pasta, fried kalamari, and grilled octopus.

We had our best dinner in the “Plakiotiko Steki” in Plaka where we enjoyed both the food and the excellent service.

Other sites of interest near Milos

Milos is part of a group of islands we call the western Cyclades.

If you want to go island-hopping, you can comfortably visit other islands of the western Cyclades: Kythnos, Serifos, Sifnos, or Kimolos.

Ferry connections among these islands are frequent, so plan to stay 2-3 days on each island to explore them comfortably.

However, ferry connections to the rest of the Aegean islands (like Paros, Sikinos, or Folegandros) are not as frequent from Milos.