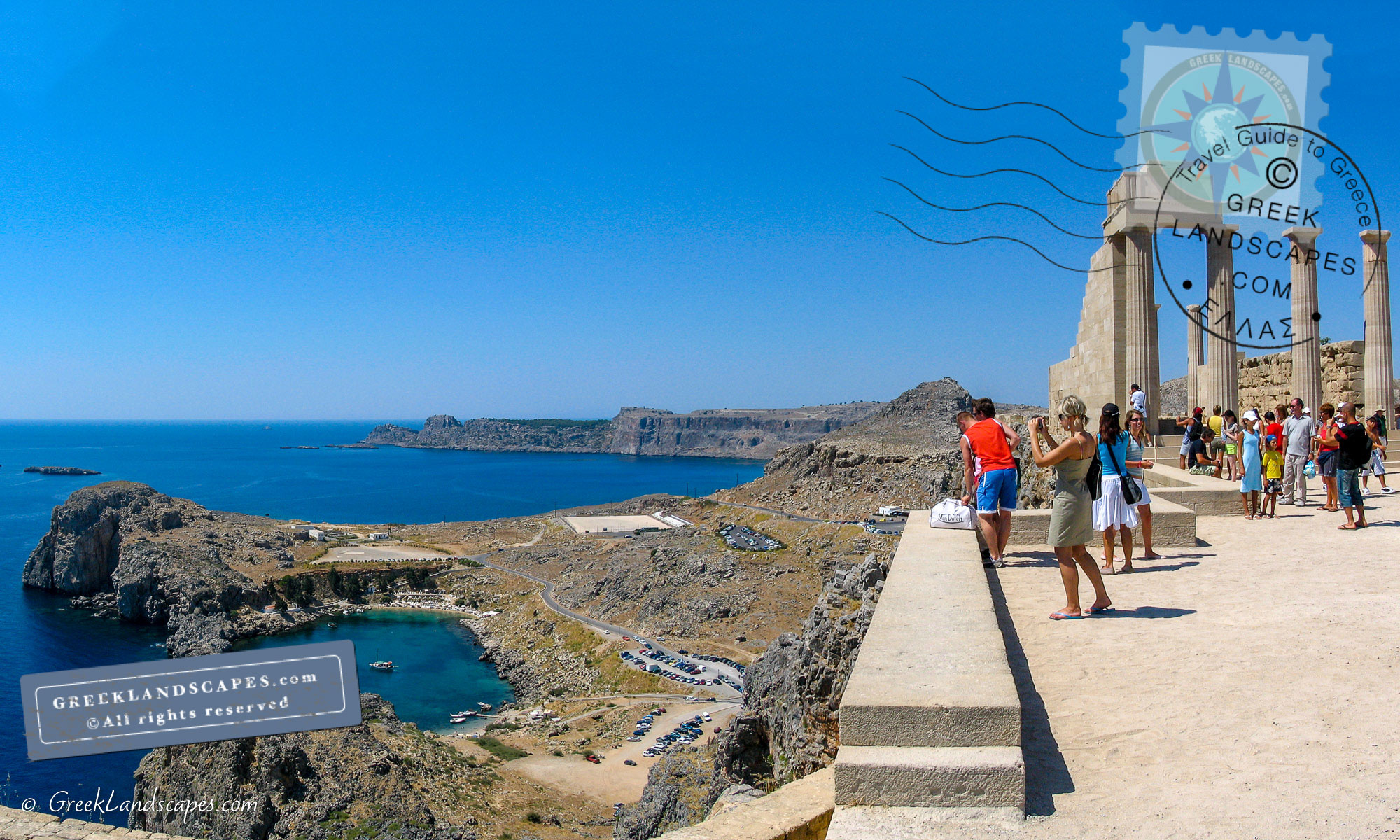 The Acropolis of Lindos is one of the most picturesque archaeological sites of Greece. It contains the ruins of many different cultures that occupied the land over the past 5,000 years.

Lindos of Rhodes is a beautiful village of white cubist houses at the foot of a steep rock that is crowned by the ancient Acropolis of Lindos.

The ancient acropolis of Lindos is the most visited archaeological site in Rhodes island.

It is an amalgam from disparate eras, including ancient Greek, Roman, Byzantine, Medieval, and Ottoman ruins

Most of the ruins date back to the Hellenistic era and the temple of Athena Lindia was built in the 6th century BCE on the spot of an earlier temple.

It was destroyed by fire in 342 BCE, and was built again after 300 BCE along with the Propylaea and the stoa (added in 208 BCE).

What stands today of the sanctuary is the restoration of these Hellenistic interventions although some earlier features are visible to the careful observer.

Much later in Byzantine times the statue of Athena was moved to Konstantinoupolis and the church of Saint John was built at the north end of the stoa ruins.

The only access point to the Acropolis in ancient times is the same one used today.

A long ascent from Lindos town culminates on a small plateau right below the ruins, and from there the sacred way, a narrow and long staircase, leads to the ancient ruins atop the Acropolis.

In the medieval era, the knights surrounded the entire acropolis plateau with the impressive wall that is still visible today, and added the “Palace of the Knights” right at the top of the long staircase that leads to the acropolis.

When the Turks controlled Rhodes they converted the church of St. John to a Muslim mosque and built several other edifices that were demolished when the Italians excavated the site early in the 20th century.

Lindos has been inhabited since the 3th millennium BCE and was a major commercial center of the island since it was home to the only practical natural harbors of the island of Rhodes.

The archaeological evidence of the greater area speak of a sizable Mycenaean population and it became a  major center after the Dorians divided the island into three separate states (Lindos, Kameiros, and Ialysos). These states existed in cooperation with each other along with Kos, Halikarnasos, and Knidos.

While Lindos was blessed with two wonderful harbors, it was also located in the least fertile part of the island. Consequently, Lindos developed its seafaring and commercial activities, and it grew to the point of being able to support its own colonies by the 7th c. BCE.

Most notable colonies founded with the help of Lindos (Crete and Tilos contributed as well) are the town of Parthenopea in Italy (later became Naples), and Gela in Sicily.

Lindos reached its highest development during the 6th c. BCE under the tyranny of the Kleovoulos, famed for his riddle-solving and law drafting abilities. At this time the temple of Athena (probably founded in 1000 BCE) was rebuilt and dedicated with the spoils of the wars of the Rhodian against the Lyceans of Asia Minor.

After the Persian wars Lindos joined the Delian League under Athenian hegemony, and along with Kameiros and Ialysos created the new city of Rhodes at the northern tip of the island, the location that has been inhabited until today.

After the city of Rhodes was founded, Lindos ceased being a commercial center, but it remained an important religious hub for subsequent centuries and through the Hellenistic era.

Along the healthy religious growth, Lindos established itself as a major cultural and artistic center.

Notably, the sculptor Charis of Lindos, student of Lysippus, was the creator of the Colossus of Rhodes, the huge bronze statue that reportedly straddled the entrance to the harbor of Rhodes and was named as one of the seven wonders of the ancient world.

Lindos is 35 Km away from Rhodes, and it can take up to an hour to reach it by car. It is blessed with three very nice beaches, but it also suffers from too many visitors during the summer months.

If you arrive after 10:00 am, you will find yourself among a frenzy of activity by donkeys and donkey guides who scurry around with glazing eyes, looking to ferry tourists to the acropolis atop the patient pack animals.

Hiring a donkey ride is the only alternative to walking up the steep, medieval staircase to the acropolis. Climbing the steep staircase is a mild inconvenience compared with dodging the mine-field of donkey poo on the way. The stench can be overpowering in the summer heat.

No matter your mode of transportation, make sure to take enough water with you because once you reach the acropolis after the hard climb in the mid-morning you will need to re-hydrate, and there is no store that sells water at the acropolis.

In fact, even on the way down it is a long time before you will reach a nearest store where you might have to pay extraordinary prices for water.

We have visited just about every major archaeological site in Greece and we never felt as crowded as we felt at Lindos.

At mid-morning the acropolis of Lindos is literally overrun by tourists. Besides the small, dark building at the entrance of the acropolis, there is no other shade to be had on top of the rock, and the sun can be punishing in the summer.

The many slippery steps, the steep climb, the lack of amenities, the crowds, and the donkey poo, make this a site to avoid after 9:00 am in the summer.

Your best bet is to arrive at Lindos at opening time (currently 8:00 am in the summer) and leave before the busses arrive from Rhodes.

The beaches of Lindos are very nice, so you might also consider a swim after the visit to the acropolis. They are lined with tavernas where you can have a pleasant meal.

Overall, the acropolis of Lindos is a very scenic site. Even though its importance in the greater ancient Greek world is minimal, it’s definitely worth a visit for the beautiful views it offers from the top.

Click here for the ancient Lindos hours and ticket information

Click to open the areal view in a new window and to get directions.