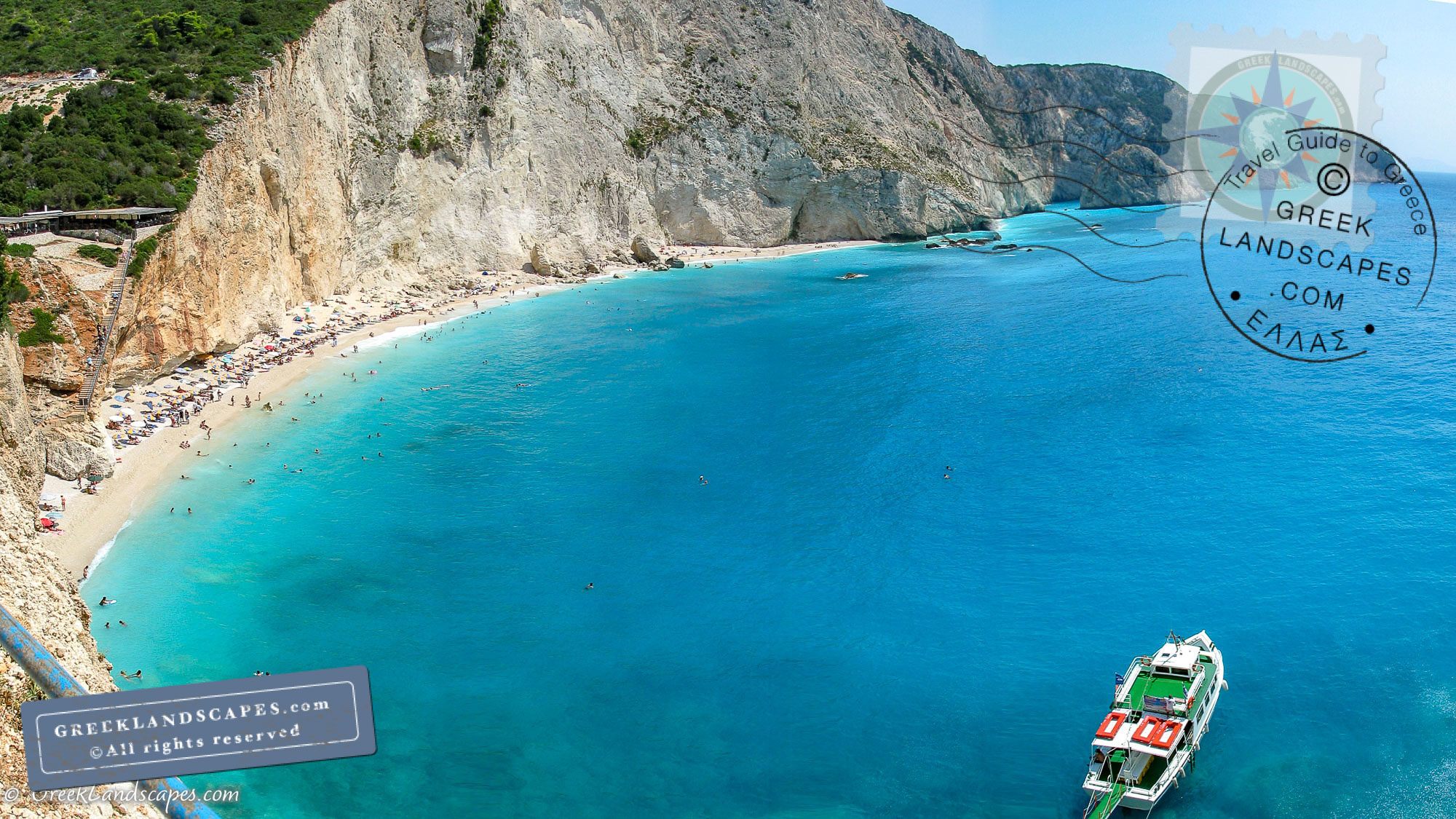 Lefkada island, in the Ionian Sea, is separated from the mainland by a small draw bridge.  The beaches of the west coast are as beautiful as you can find in all of Greece, while the interior is mountainous with villages that hum a traditional tune, seemingly untouched by tourism.

Agiofili beach is one of the best in Lefkada island.

Egremni is a long, quiet beach in Lefkada island.

One of the narrow beaches at Nidri, Lefkada, Greece.

As soon as you cross the old (and tired) drawbridge that connects it to the mainland you will be in the town of Lefkada . From there two main roads diverge to the east and west coast of the island.

The main attraction to Lefkada is its array of beautiful beaches, the best of which are on the west and south coasts. Surprisingly, these are also the most undeveloped parts of the island.

In contrast, the east coast receive most of the visitors and infrastructure attention. Part of the reason is that the terrain of the east is easier to navigate (and build roads), while the west is rugged and challenging to navigate.

Consequently the east coast of Lefkada is much more developed than the rest of the island. This ease of access and port infrastructure have transformed the old fishing village of Nydri into a generic tourist town.

Nydri is the base for many small boats that offer daily cruises around the island. Curiously, there are no good beaches to swim near Nydri, besides a couple of shingle patches or Desimi and Mikros Gialos a few kilometers to the south. but these beaches are nothing to write home about compared with the beaches of western Lefkas.

You would think that the west coast is quieter, but that’s not the case. In the summer, both east and west coasts are bursting at the seams with visitors, it’s just that on the west coast tiny resorts feel more overcrowded.

Porto Katsiki, Egremni, Kathisma, and Milos are such strong magnets for beach connoisseurs, most are willing to brave the narrow mountain roads and their notorious gridlock for a few hours on their sand.

Things to Do and See

Visit the town of Lefkada

Lefkada town is a nice place to visit, or even stay for the duration of your holiday.

It has an Italian architectural character and lively street life. During the day in the summer it’s a sleepy town, but once the sun dips bellow the horizon, people of all ages, locals and visitors alike, come out for a slow stroll through the narrow streets, and to have a drink or dinner with friends.

The town square is the center of life. It has the typical Greek magical flare with small street vendors peddling their wares–balloons, windmills, jewelry, toys, cotton candy– as young and old, locals and tourists, children on bicycles and on running feet, mingle about under the moonlight. It’s a picture of life and happiness. One you find in every small town in Greece.

You may reach the beaches near Lefkada town on foot, or better yet, with a bicycle. In fact, the town is built over flat terrain, so a bicycle is an excellent mode of transportation when there.

The island’s main attraction are its beautiful beaches. The most attractive ones include Kathisma, Milos, Egremni, Porto-Katsiki, and the lesser known Agiofili.

If you go, you will probably visit most, if not all of these. Kathisma beach is the most popular and easiest to reach from this group. It is preferred by those who enjoy bars, music, and beach games.

Egremni on the other hand is hard to get to, so despite its beauty and length it remains almost deserted. It helps that the only access from the road includes 350 steps.

Porto-Katsiki is also a pain to get to, but it’s smaller, easier to reach, and a popular stop for every day-cruise. Consequently, its beauty is buried under the multitude of tourists that squeeze tightly against each other on the sand.

Agiofili is on the south coast and it’s best reached by boat from nearby Vasiliki town. A dirt road will bring your car close to it, but the last stretch does require a bit of rough hiking.

There are so many other beaches on Lefkada, it would be impossible to visit them all. It’s a good excuse for a second or third visit.

Click here to read our complete reviews and ratings of Lefkada beaches.

If you have been to Iceland, Nidri waterfall (map)will feel tiny. Well, Greece does not have the snow or rainfall to feed large waterfalls, so it’s a miracle that in a small island you can find a waterfall.

The hike to it is very pleasant, though a tree-covered footpath which is framed by dramatic cliffs on both sides.

At the end of the path, the waterfall forms a small pool of clean, cold water, so bring your swimwear and enjoy a dip into the pool.

Getting to and around the Lefkada

If you are flying to Lefkada, the nearest airport to Lefkada is Aktion airport. The town of Lefkada is about 30 minutes away from the airport.

You may rent a car at the airport, or you may use the public bus service form Aktion to Lefkada town.

A taxi from Aktion airport to Lefkada takes about 30 minutes and costs about 35 Euro.

Getting to Lefkada by car is easy via the Aktion undersea tunnel (toll road) you access from Preveza town.

Unfortunately, this ease of access contributes much more traffic to the considerable bottleneck of the island narrow, outdated, and treacherous roads.

During the summer, waiting up to an hour to get through the draw bridge would is not out of the question–especially Friday through Sunday when the half of Epirus prefecture working population packs their car with a “Lefkada or bust” attitude.

But the gridlock does not end after you cross the drawbridge.

If Lefkada town is your final destination, park and enjoy. If you are heading for a resort on the east coast, you will have a comfortable drive.

But if you are heading to a west-coast destination, you will find yourself basking in heavy traffic, especially at Agios Nikitas village.

Once you get through that bottleneck the traffic is still too heavy for the narrow road all the way to Porto Katsiki, but at least you’ll be moving.

From Vasiliki in the south of Lefkada you may catch a small ferry to Firskardo, in Kefalonia island.

From Nydri, you may go on day-cruises to Meganisi opposite the town, or the wildly popular with Greeks cruise to Skorpios private island (originally owned by Aristotelis Onassis).

Many boats take passengers around Lefkada’s coast, stopping appropriately at the beaches of Porto-Katsiki and Egremeni. Some include a visit to some of Kefalonia beaches.