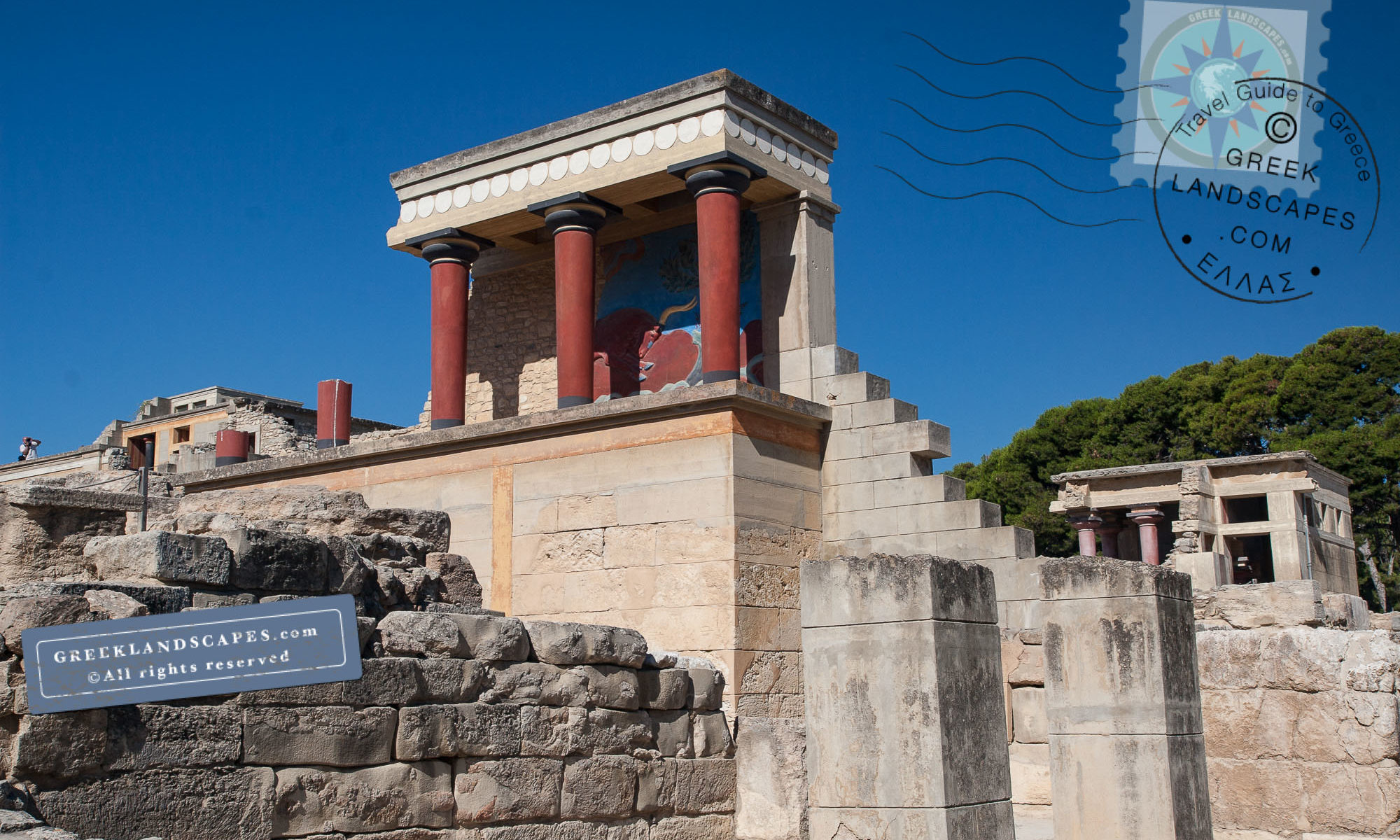 The palace of Knossos is the grandest of the four Minoan palaces that have been unearthed in Crete, and its complex architecture has been identified as the legendary “Labyrinth”.

The bull was very significant in Minoan Crete.

The ceremonial Throne Room at Knossos.

The Grand Staircase leads to the royal quarters.

Typical reconstruction at Knossos. The palace was the most important Minoan center in Bronze Age Crete.

Knossos is an expansive palace atop a low hill just a few kilometers outside Heraklion in Crete, and it seems to be the destination of just about every visitor who sets foot on the island.

Justifiably so, because the splendor and flamboyance of prehistoric Cretans is a spectacle that establishes a proper historical perspective on the roots of western culture.

The Minoans are credited as the first European civilization. Their orderly, peaceful, and commercial way of living influenced the Helladic (mainland) cultures of the time, and they, in turn transformed into Classical and Hellenistic Greece.

The palace of Knossos was the stage for a plethora of fascinating myths in ancient Greece.

Its multi-floor buildings contain impressive staircases and ramps that connect throne rooms, baths, storage units, and worship chambers. The rooms are intricately connected with long corridors, light wells, tall pillars, and indoor plumbing. Its complexity and organization is trully remarkable for people who lived more than 3500 years ago.

King Minos was a legend even in ancient times. His civilization predated the Classical Greeks by a thousand years, and it was after him that the entire bronze age civilization of Crete took its name.

The ancient civilization of Crete was named “Minoan” by the famed archaeologist Evans who excavated Knossos in the beginning of the 20th century BCE.

His findings at the palace of Knossos helped redefine the historical record of Bronze age Greece and to fuel the imagination of generations of subsequent archaeologists who roamed Crete in search of more clues to this splendid civilization, the Minoans.

Knossos is named in ancient Greek sources as the palace of the mighty king Minos.

“And the first person known to us by tradition as having established a navy is Minos. He made himself master of what is now called the Hellenic sea, and ruled over the Cyclades, into most of which he sent the first colonies, expelling the Carians and appointing his own sons governors; and thus did his best to put down piracy in those waters, a necessary step to secure the revenues for his own use.” (“The History of the Peloponnesian War”, by Thucydides, translated by Richard Crawley. entire text available at the Internet Classics Archive)

Despite its riches, the palace of Knossos had no defensive walls. Its chambers were dedicated to worship, statesmanship, commerce, and entertainment.

The artifacts and the impressive wall paintings that were found represent nature scenes, and abstract themes, consistent with a culture that was closely dependent on its natural environment.

There are several wall painting reproductions in Knossos, but the originals are sheltered in the Heraklion Archaeological Museum.

As we know now from excavations such as the Knossos palace, the Minoans lived affluently in their vast island sheltered by the sea, and by their impressive organizational skills.

While the island of Crete was more than capable of supporting the local population, the ancient inhabitants of the island flourished through an extensive commercial network which connected the major prehistoric civilizations of Anatolia, the Middle East, Egypt, the Aegean Islands, and the Helladic cultures of the Greek mainland.

This is the palace that was built by the famed Architect Dedalus who after completing its construction was held prisoner by king Minos so he would be unable to divulge the palace’s plan to anyone else.

As the story goes, Dedalus and his son Ikaros constructed wings made of feathers and wax, and thus were able to fly off the island to freedom. In a tragic turn of events, during their escape youthful Ikaros soared higher and higher in the sky despite his wise father’s advise.

Getting close to the sun was his undoing as the heat melted the wax which held the wings together and he plunged to his death somewhere in the Aegean sea, near the island we now call “Ikaria”.

Knossos was the place where the minotaur – a terrible monster with the body of a man and the head of a bull – lived to torment the bounty of six youths and six maidens who were sent by Athens every nine years in tribute to king Minos’ hegemony.

Knossos is the place where the Athenian hero Theseus put an end to this tradition by slaying the beast with the aid of the daughter of Minos, Ariadne, who fell in love with him and gave him a ball of thread which he unraveled as he entered the labyrinth, and followed on his way back towards the exit.

As the legend goes, Theseus took Ariadne with him back to Athens but on the way there he abandoned her at Naxos where she was subsequently rescued by Bacchus.

At the end of Theseus’ voyage his triumphant return turned tragic when he forgot to change the sails from black to white causing his waiting father Aegeus to believe that his son was dead. Distraught he leapped to his death in the sea, which was named henceforth in his memory: Aegean.

The first archaeologist who excavated Knossos was (the appropriately named) Minos Kalokairinos who was a native of Crete and had already dug a few areas of the palace before Evans, unearthing in the process a wealth of artifacts that proved the existence of a previously unknown civilization.

Kalokairinos began excavating Knossos in 1878, and he exposed among other areas part of the ante chamber of the Throne room with its red frescoes, and the third magazine of the west wing with its 12 plithoi which still contained peas, broad beans, and barley.

Unfortunately all of Kalokairinos’ finds along with his notes were destroyed by fire during the liberation of Crete from the Ottoman empire.

Arthur Evans had extensive contact with Kalokairinos, and he had seen the finds which fueled his determination to excavate the site after the Cretan parliament refused Kalokairinos a licence to dig the site.

Evans began excavating on March 23, 1900 and what he unearthed changed the historical landscape of prehistoric Aegean, and defined the inhabitants of ancient Crete as a culture independent of their well known contemporaries. A people who cherished the harmony of nature, and who lived an affluent and joyous life.

What one sees at Knossos today is the result of extensive restorations that Evans undertook in order to reveal the splendor and complexity of the architecture.

For this he has been criticized extensively, because many of his interventions, while educated, do not necessarily reflect a true reconstruction of the ancient palace.

Admittedly, he took liberties with his “reconstitutions”, and he has been criticized heavily for it.

While the entire structure is accepted as closely reflecting the ancient reality, probably many of the details were born in the active mind of the passionate archaeologist during the rebuilding process.

Nonetheless, the reconstructions do add a lot of value for the visitors. Without them it would have been impossible to comprehend the complexity of the architecture, and to imagine the flamboyant way of Minoan thinking.

Knossos is one of the most visited sites in Greece, so it gets very crowded with large groups of tourists arriving after 9:30 am. Unless you arrive right at opening time, expect long lines at the ticket kiosks and to be among large numbers of visitors in the small chambers of the palace.

There is plenty of shade on the site, but expect to be exposed to the sun and heat for large parts of your visit.

Click here for the ancient Agora hours and ticket information