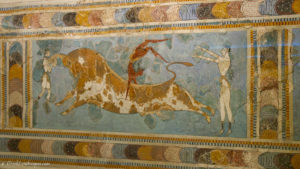 The Bull-Leaping fresco was found in Knossos. It depicts an event (probably ceremonial) where one female figure holds the charing bull by the horns, while another female is waiting to catch the male that is in the process of leaping over the bull. Minoan Crete, Knossos Palace, 1450-1400 BCE.