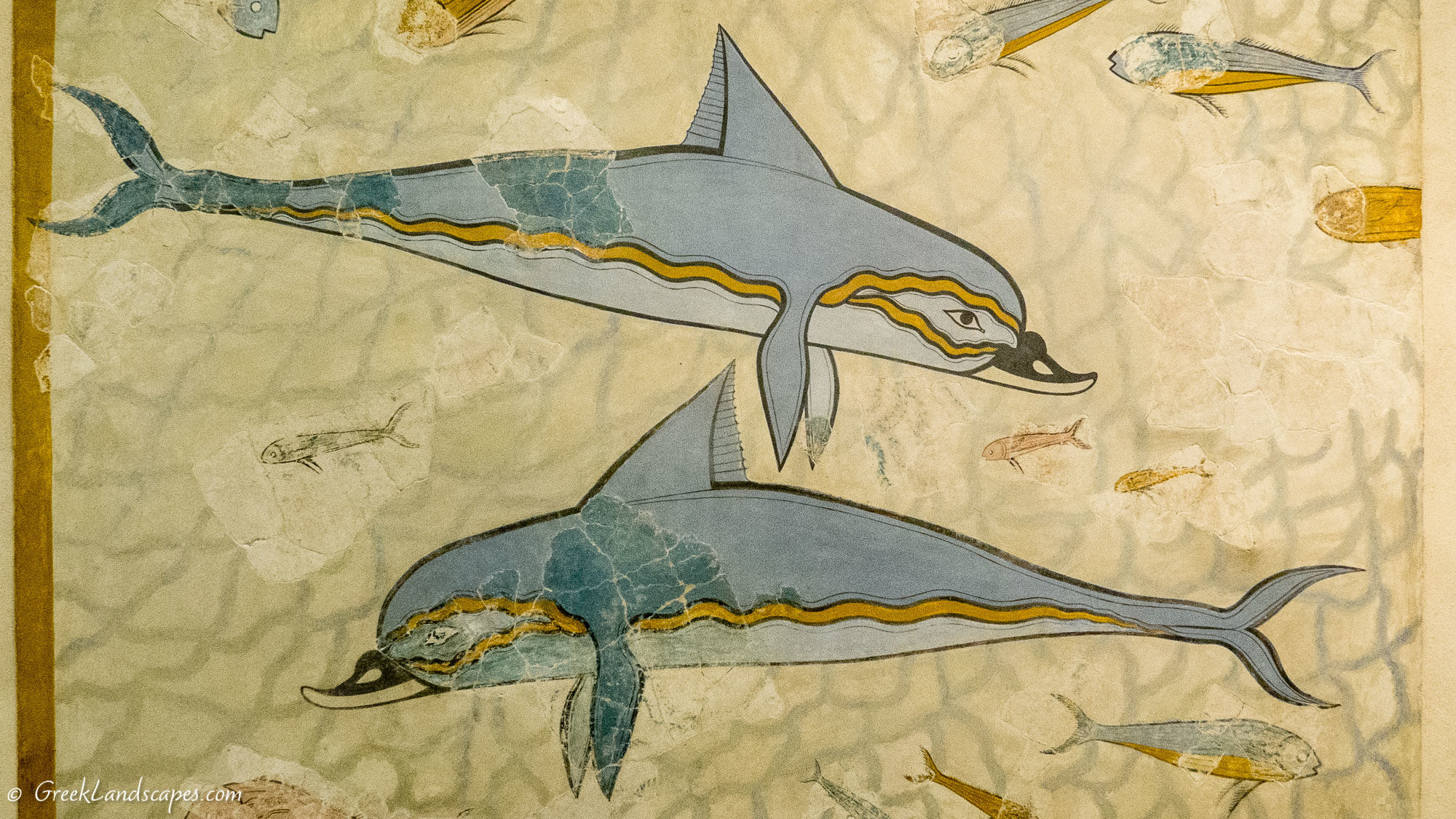 The Heraklion Archaeological Museum houses the second most important collection of antiquities in Greece (second only to the National Museum of Athens), and the chronology of artifacts represent life in Crete from 6300 BCE until the 1st century CE.

The Phaistos disk is made of baked clay and it was found at the palace of Phaistos.

The Minoan Snake Goddess statuette was found in the Knossos’ temple.

The golden Ring of Minos at the Heraklion Archaeological Museum.

The Harvest Vase is a rhyton with a relief scene of a procession of men.

The gold Bee Pendant from Malia.

The Bull-Leaping fresco from Knossos.

The extensive archaeological sites of Crete have yielded a plethora of spectacular artifacts dating back to neolithic times. The most important finds from excavations in Crete can be found at the Heraklion (Ηράκλειον) Archaeological Museum.

Although a “decentralization” philosophy has landed many artifacts in smaller museum around the island and closer to their place of origin, a visit to Crete would not be complete without a visit to this museum.

The museum houses the second most important collection of antiquities in Greece (The National Archaeological Museum of Athens is a much more expansive and inclusive collection), and the chronology of artifacts represent life in Crete from 6300 BCE until the first century CE.

The collection of Neolithic artifacts is comprised mostly of ceramic vessels found in sacred caves and Tholos tombs, but the bulk of the museum is filled with art from the Minoan era.

The rooms of the museum are appropriately arranged for the most part in chronological order, so it is easy to follow the relative evolution of the Minoan culture through its artistic achievements.

The room that contains artifacts from the Neolithic and the Pre-Palatial periods, span a period from 7000 BCE until 1900 BCE.

Many beautiful alabaster and ceramic vessels which were found in places like Phaistos, Levina, Fourni, Mohlos, and Palekastro are exhibited behind glass cases. A large vitrine protects a multitude of typical Cycladic marble statuettes that were unearthed in Crete.

The room with artifacts from the Proto-Palatial era span a period from  1900-1700 BCE.

Most of the exhibitions in this room represent the early palace cultures at Knossos, Malia, Zakros, Gournia, and from numerous burial places of the same era. Best known of the artifacts are the bronze knife with the decorative golden handle, and the small pottery pieces which represent multi-storied houses of the era.

You will also find important ceramics from the excavations at Phaistos. They include a great deal of “Kamares” pottery with their bold designs and contrasting color patterns.

Nearby you will find the mysterious “Phaistos Disk” prominently displayed in the center of the room.

Other important artifacts include the “Snake Goddess” statuette, the beautiful “Bull Rhyton”, both from Knossos, and the the ivory statuette of an acrobat, which exhibits surprising fluid motion as he leaps in space, and on the other side of the room, a little behind the Bull Rython, rests the alabaster Rython in the shape of a lioness’ head.

Artifacts from the later stages of the Knossos palace fill another room. It includes impressive, gigantic pithoi, and many ceramic artifacts. Most noteworthy is the clay replica of a Minoan house, and the tablets of Linear A script (which has yet to be deciphered).

Artifacts from the Necropolis of Knossos, Phaistos, and Arhanes include two helmets (one made of boar’s teeth, and one made of bronze). They are similar to the ones found in mainland Greece.

Some of the most exciting artifacts of the museum include gold ring-seals that show how highly skilled the Minoan goldsmiths were.

The “Bee Pendant” is thematically spectacular, and technically immaculate. It was found at Chrisolakos, the burial ground outside the palace of Malia.

The Labyrns (the giant double axes) exhibited around the room look menacing, but they were nothing more than ceremonial objects in Minoan Crete, and were not used in warfare.

The same case where one finds the Bee pendant, shelters a number of beautiful Minoan gold rings and “double axe” jewelry.

The unique steatite “Harvesters” rython in the middle of this room is decorated with a dynamic scene of olive harvesters who march as they sing at the top of their voice. It is a beautiful arrangement of low relief forms of unprecedented expressive power.

Another small steatite rython nearby is adorned with a low relief of what looks like children dressed up as soldiers.

In the room dedicated to the palace of Kato Zakros contains several impressive rhythms, but most impressive of all is the one made of oryx, and it is decorated with silver and gold.

The exhibition of Neo-Palatial era in eastern Crete is where you will find an impressive array of seals carved in semi-precious stones and ivory.

One of the highlights of the museum is room that contains the famed Minoan frescoes from Knossos such as the Dolphins wall painting from the Queen’s chambers, and the Bull-leaping events.

In the center of the room you can see the famous sarcophagus from Agia Triada, decorated with scenes of worship, and abstract motifs. An impressive wooden replica of the palace of Knossos is also exhibited in this room.

Besides Minoan artifacts the museum contains art from the later Archaic, Classical, and Hellenistic Greece.

It can take anywhere from one to three hours to tour the entire museum, and more scholarly study of the artifacts would command multiple visits.