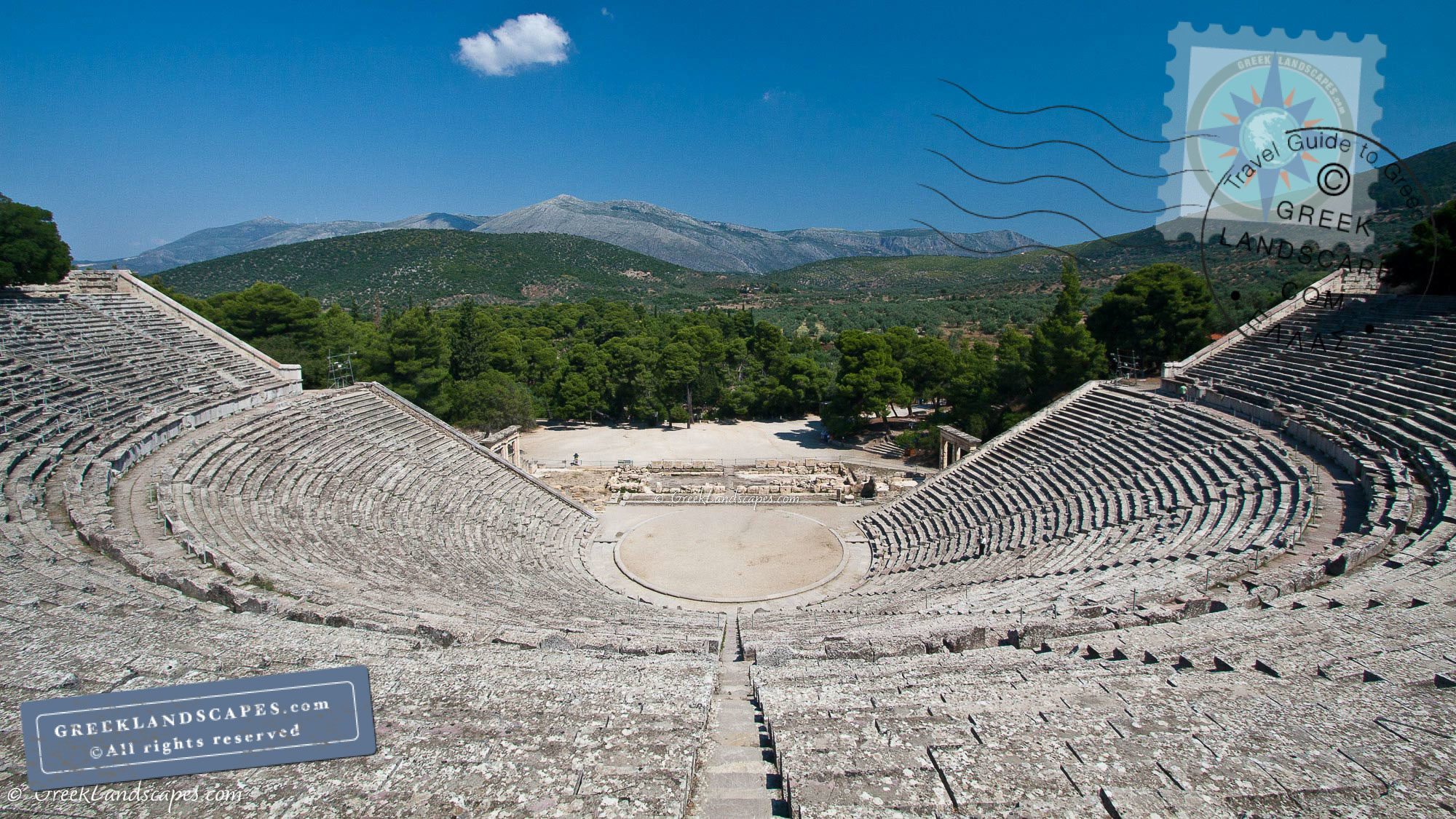 Epidaurus (Επίδαυρος) was a popular place of healing in antiquity. It is home to the most beautiful ancient theater, famed for its visual and acoustic symmetry. The theater is still in use today for performances.

What to See and Do at Epidaurus

The sanctuary of Asclepius at Epidaurus is an extensive archaeological site in Argolis, Peloponnese, in Greece.

Its most important attraction is the well preserved ancient theater, which is considered to be the most beautiful in the world for it’s perfect visual proportions and spectacular acoustics.

Once you visit, you will probably agree that the aesthetics and acoustics of the theater at Epidaurus are breathtaking.

Part of its beauty is because it is one of the very few theaters that retains its original circular orchestra (the area where the chorus and actors perform).

All ancient Greek theaters had circular orchestras. But it’s rare to see one intact today because during Roman times, most theater “Orchestras” were changed from a circle to a semicircle.

The view from the cavea (the seating area) is beautiful. The sweeping architectural geometry merges with the beautiful hilly landscape beyond the scene, making the perfect backdrop for the plays.

The theatre is preserved almost intact since ancient times. It was built in the early 3d c. BCE with 34 rows, but in the 2nd century it was enlarged to double its capacity to about 12000 spectators.

When you visit, don’t neglect to stand in the center of the circular orchestra (right on the square marble that marks it), and speak as softly as you can.

Be amazed how your voice returns to your ears in a stereophonic fashion, and how even the farthest seating spectators can hear you in the stands!

The Sanctuary of Asclepius Archaeological Site

The rest of the sanctuary is not as well preserved as the Theater, though a few restored parts give you a vague idea of what the ancient monuments looked like.

The most interesting building is by far the Tholos. You can also see the massive Hestiatorion (the dining hall), the Abaton Stoa, the Katagogion, and the Stadium.

The Temple of Asclepius has been covered for its protection and is not visible.

The Hestiatorion complex at Epidaurus

Pausanias calls the circular building “Tholos”, but inscriptions on site refer to it as Thymele (altar)

The stoa of the Baton (Enkoimeterion)

There is a small museum near the site entrance. It is worth visiting for the statues and replicas it contains, but most of the important statues from the Epidaurus are housed at the National Archaeological Museum of Athens.

Watch an Ancient Greek Play in the Theater

The theater is still used today for performances, usually as part of the Athens/Epidaurus festival in July and August.

Watching an ancient Greek tragedy or comedy in the Epidaurus Theatre could be one of your vacation highlights.

The majority of the plays are modern interpretations of ancient Greek tragedies or comedies by contemporary theatre groups from around the world.

The plays are a casual-dress affair, popular with Greeks and tourists alike. Many performances have large screens on either side of the orchestra to project english subtitles.

Traffic to the site is heavy before and after the events, which take place after sunset. Theres is ample parking on site, and an army of policemen and attendants ensure traffic moves smoothly.

Get there at least an hour early to get a good seat, and to watch the sunset.

There are plenty of unique parts that come with an open-air theater.

In August, you watch for Jupiter to set in the SW around 10 pm, behind the performance.

You will also get to enjoy the songs of night owls, and the shadows of the actors gliding like shadow-puppets on the pine trees behind the orchestra.

At the time, therapy involved not only the physical self, but also the mental and spiritual entity of the patient.

The art, including the theater and the plays were therefore vital parts of the therapy provided to patients.

A Brief History of Epidaurus

Evidence of habitation on the site goes back to the 3d millennium BCE. It was use by the Mycenaeans around 1200 BCE, and after the 10th century BCE the cult of Apollo Malaetas was established as a place of pilgrimage for healing.

The sanctuary was very popular in the 7th c. BCE when Asclepius became a patron deity as the son of healing Apollo, who was also worshiped.

The 3d and 4th c. BCE were Epidaurus glory days. At that time, some of the largest buildings were erected. These included the dormitory where the patient resided, the dining hall, and the theatre.

In the Roman-Persian wars, the Epidaurus sanctuary was sacked by Mithridates in the 1st c. BCE, but the Romans rebuilt it soon afterward.

It remained popular throughout Roman times, and it even transformed into a Christian healing center in the later years of the empire.

You can visit Epidaurus on a day-trip from Athens. But if you want to catch an ancient Greek play at the Epidaurus theatre, it’s best to stay a few days in Nafplio (we recommend Amalia Hotel in the outskirts of Nafplio) .

That’s because the plays take place at or after sunset, and you might be too tired to drive back to Athens in the middle of the night when the play ends. Besides, if you visit the area, you will probably want to see the other important archaeological sites in the vicinity.

If you are in a hurry, or if you only want the “highlights”, you can visit the Epidaurus theatre and the museum and skip the rest of the archaeological site which covers a large area.

If you are driving from Athens, you will see signs near Corinth to Epidaurus.  They point to the old (1950’s) coastal road. This might be the most scenic route (and Google Maps recommended one), but the Corinth-Nafplio highway is more comfortable to drive even if it adds about 10 extra minutes to the trip.

There is good tree coverage, but you will be exposed to the sun when you get close to the ruins. Further, the walk through it can be challenging at times, though it’s not as rough as Mycenae.

The site’s museum is a welcome relief from the relentless summer sun, so you might want to visit it last.

You can buy food and water near the ticket kiosk at the entrance, but once inside the site, there are no amenities.

Restrooms are located near the theatre.

Click here for the ancient Epidaurus hours and ticket information