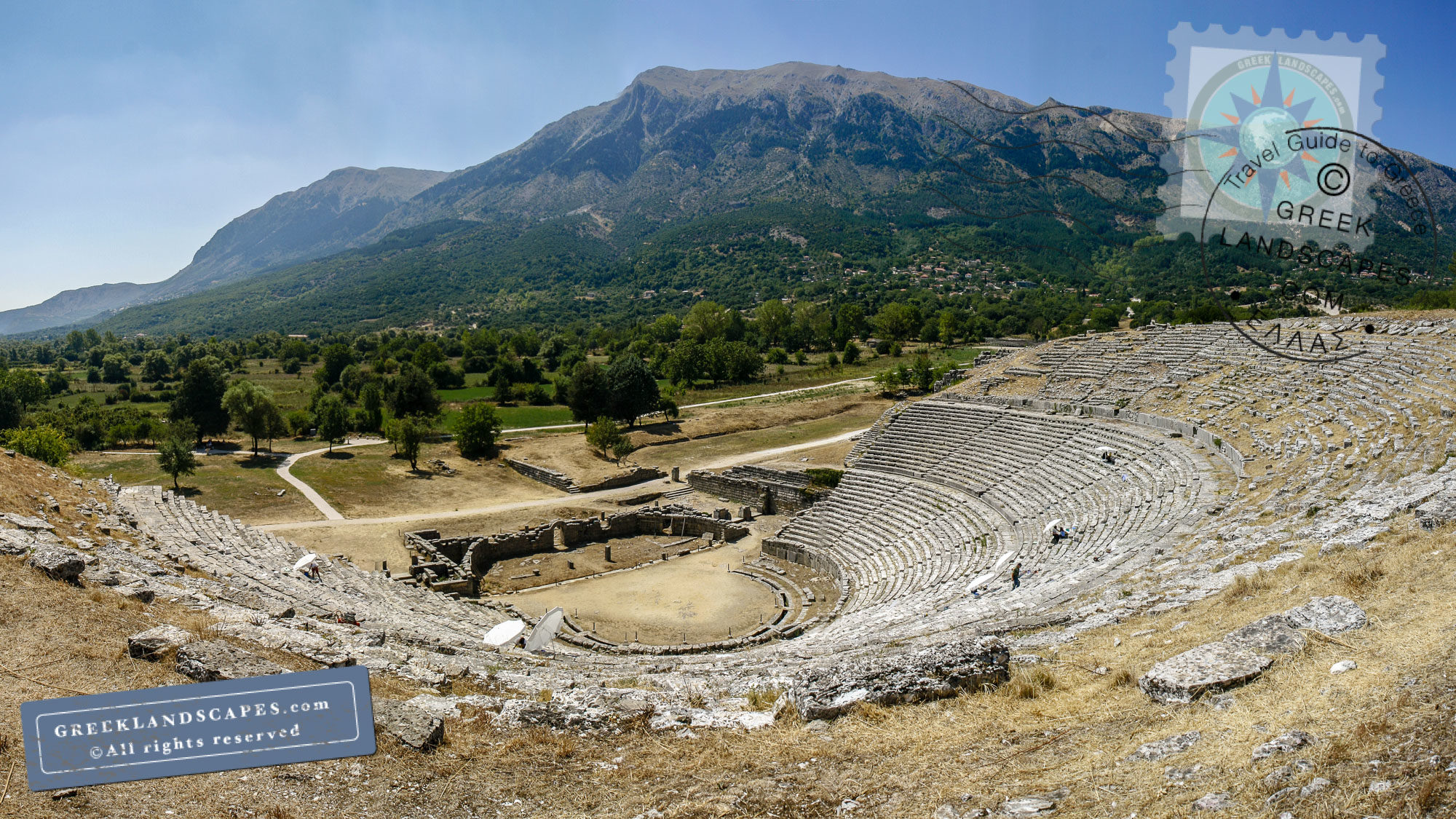 Dodoni archaeological site is one of the most ancient of oracles in Greece. It was dedicated to Zeus. It’ not as well known as other archeological sites in Greece, but it’s a nice place to visit, especially to see one of the best preserved ancient Greek theaters.

Reconstruction of the Bouleuterion gate at Dodona. 3d. c. BCE.

Dodoni theatre with the back of the skene and the cavea.

A sign at the archaeological site shows how the oracle looked in ancient times.

Hiera Oikia with an oak tree.

Dodoni theatre view from the orchestra.

Dodoni is a small archaeological site out of the main path of most tourists.

As such, it’s a quite place, with few groups and individuals strolling about the ruins.

The sanctuary of Zeus was a major spiritual place in ancient Greece. Only Delphi oracle enjoyed more fame than Dodoni in ancient times.

It was the oldest of the Greek oracles and ancient people traveled great distances in order to consult the priests who foretold the future.

Outside the temple of Zeus the priests gathered under the sacred Oak tree and listened to the sound of the leaves as they shivered in the breeze and glimpsed at the future.

People from the entire known world would make the pilgrimage in ancient times in order to consult the future-telling Oak tree and to attend cultural festivals that took place regularly at the sanctuary of Zeus.

“The divine couple had their adobe in the Oak-tree, and from the rustling of its leaves and the flight of the doves (Peleiades) that nested in is branches the soothsayers of Zeus, the prophets (Selli), who slept on the ground and never washed their feet so as to be in contact with the earth and draw their oracular powers from it, interpreted the will of the god to mortals.” (Dodona,” by Sotirios Dakaris.)

Dodoni is a complex archaeological site because it remained a vital center from about 2000 BCE and flourished well into the Roman times.

Before it was dedicated to Zeus, there is evidence that the site might have been the domain of the Mother Goddess. Mother Goddess has been identified either as Rhea or Gaia.

The oracle of Zeus was shared by Dione. Dione was relegated to a smaller divinity role throughout Greece, and eventually was merged with Zeus’ wife, Hera. But in Dodona, Dione was worshiped as a distinct deity.

It was renown as an oracle, and ancient people traveled from far and beyond to visit it.

Pilgrims from all walks of life visited the oracle to pay their respects to Zeus, to ask for his favor, and for his oracles or advice.

They wrote their questions on lead sheets, many of which were unearthed in excavations.

Their questions reflected their major worries. Examples on lead sheets include concerns of marriage, emigration, military, and wealth.

The priests listened to the rustling of the leaves of the sacred oak tree as they shivered in the breeze and interpreted the sound as Zeus’ oracular predictions of the future.

Another version indicates that the priests interpreted the sound of the falling acorns onto bronze cauldrons.

The Naia festival, which included athletic and theatrical competitions took place in the sanctuary.

Most of the monumental buildings were built after the 4th c. BCE when the festival started.

The Oracle is located at the foot of the majestic twin peaks of mount Tomaros (1972m and 1816m tall), and while the entire site is sprinkled with ancient ruins, the visually imposing theatre dominates the landscapes.

The limestone seats appear weather-beaten and nested in a respectful semicircle between the two enormous retaining walls.

The theatre was host to theatrical plays in ancient Greece, and it has been restored to host modern events in the last few years.

The original theater was modified by the Romans at a later date to accommodate their gladiatorial games. This required a semi-circular orchestra and some protection of the front row seats from the happenings in the orchestra.

The rest of the archaeological site is not as visually exciting as the theater since only the rectangular foundations of the buildings remain to outline an enormous complex of temples, hostels, granaries and other buildings.

As a religious sanctuary, the oracle of Zeus was adorned with all the riches that ancient people could afford, and excavations have unearthed a multitude of artifacts that date back to archaic times.

None of it remains on the site of course. Most of the important findings are housed at the National Archaeological Museum in Athens, while some reside in the Archaeological museum at Ioannina, both of which are well worth a visit.

You need a car to get to Dodoni, which is is about half hour away from the nearest large city, Ioannina.

Driving from Parga, Igoumenitsa, and Arta take about 1.5 hours. It’s easy to visit the archaeological site as a day-trip from these nearby destinations.

The drive to the archaeological site is comfortable through the newly built Egnatia road.

There is very little shade so getting there early in the morning is advised.

Since there are no amenities inside the archaeological park or anywhere near the entrance, you should bring your own water along.

Restrooms are available near the ticket booth at the entrance, so plan to pay them a visit before you venture all the way to the other end of the site.

There is a large parking lot with ample space right in front of the entrance, and three small and quiet villages around the site, all of which are within a short driving distance.

The ticket booth closes around 2:30pm, and exploring the site leisurely would take you about an hour (although you could rush through it in half that time.)

Click here for the ancient Dodoni hours and ticket information

Ask for the free brochure when you get the ticket to make some sense and orient yourself in the ruins.

Another sign at the archaeological site. It shows how the Hiera Oikia looked in ancient times.

The plan will help get you oriented during your visit

The Bouleuterion and Prytaneion at Dodona.