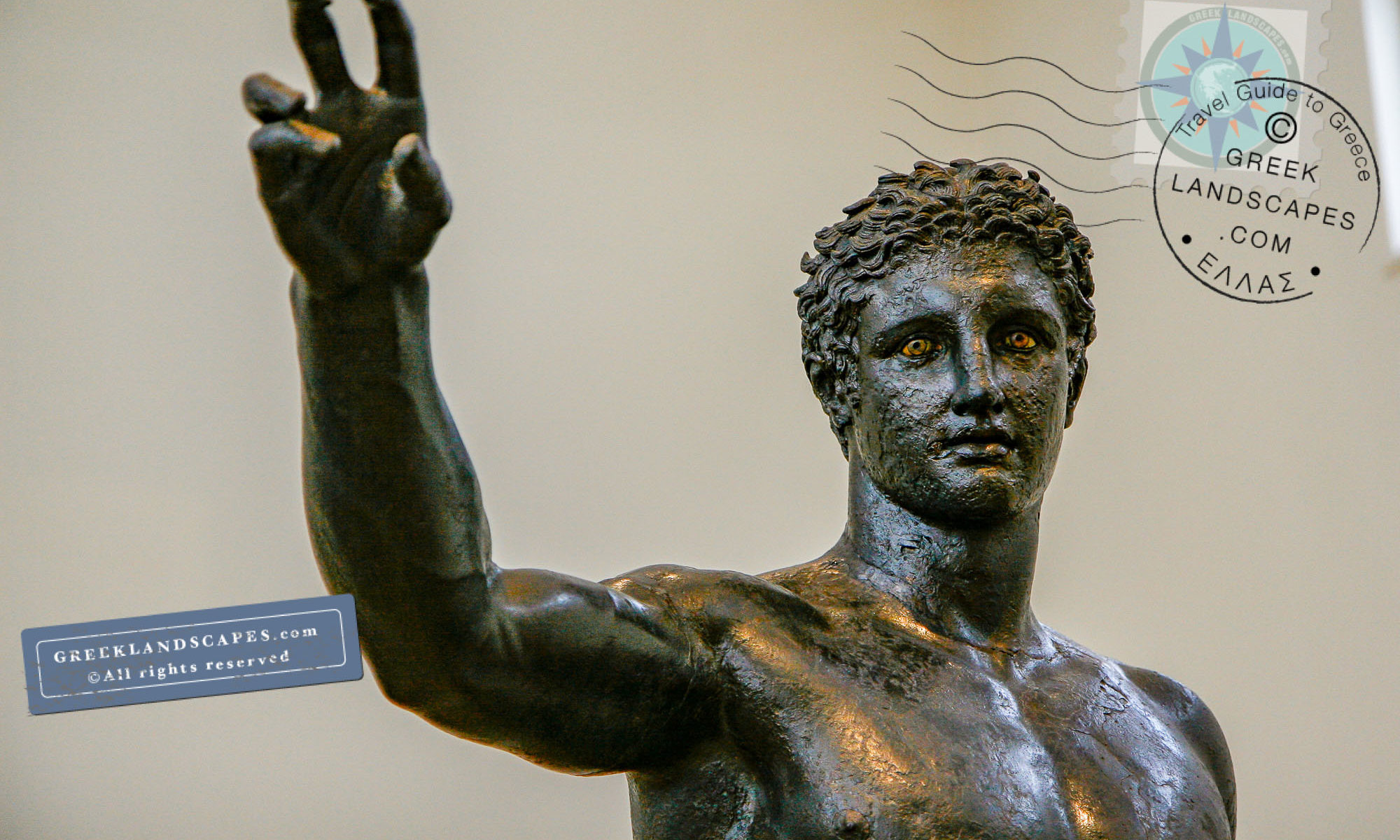 At the National Museum of Athens: The ancient Greek Artist invented his own self and became the creator of god and man alike in a universe of perfect formal proportions, idealized aesthetic values and a newly found sense of freedom. This was a freedom from barbarism and tyranny.

Bronze statue of a youth, found at sea near Marathon. Circa 320 BCE

Horse and handler. Detail from the Parthenon frieze.

Bronze statue of a young man, from the Antikythera shipwreck. Circa 340-330 BCE

The Classical period of Ancient Greece produced some of the most exquisite sculptures the world has ever seen.

The art of the Classical Greek style is characterized by a joyous freedom of movement, freedom of expression, and it celebrates mankind as an independent entity (atomo).

During this period, artists begin to expand the formal aesthetic boundaries while they worked in expressing the human figure in a more naturalistic manner. They were able to replace the strict asymmetry of the figure with a free flowing form more true to life, while they approached an ideal aesthetic vision through stone and bronze.

The form of classical sculpture became fluid and natural and the stylization of the Archaic art gave way to realistic figures which emanated the illusion of moving through space.

For the first time in human history, human anatomy was deemed worthy of being immortalized in stone or bronze, and the humble and laborious forward step of the kouros statues was replaced by poses that commanded their space with effortless movement.

During the classical period the Greek artists replaced the stiff vertical figures of the archaic period with three-dimensional snap shots of figures in action. While the archaic sculptures appeared static the classical statues held dynamic poses bursting with potential energy.

The overall patterns of immobile muscles were developed into a complex universe of tension and relaxation. The ancient Greek sculptors had finally achieved balance through the opposing action of the human muscle groups.

It was the first time in human history that the human body was studied for its aesthetic values, and was treated as an autonomous universe.

The object of art became the human itself as the focus of the artist revolved around ordinary subjects like the the weight shift during the forward step at the moment before the release of the thunder, the tying of a ribbon around ones head, or just the shift of the pelvis when one leg supports the man’s weight.

The classical Greek sculptor was more of a magician than an artist. He transcended ordinary subjects into extraordinary universal signs. And in the process, he reversed thousands of years of artistic tradition when he shifted the focus from the supernatural and unknown, to more earthly matters.

Throughout history the human figure had been used by many civilizations as a mere object which signified metaphysical preoccupation. On the other hand, in classical Greek sculpture the figures often depict deities but clearly the human body becomes the subject of study. The gods were depicted as a mere excuse to study humans.

In ancient Greece, a long intellectual evolution reached its logical conclusion during the classical era when man as a living organism on this planet acquired the importance it deserved, and gods became human through marble and bronze.

The golden age of classical Greece dictated that this earthly world can be explained in terms of cause and effect, and that every civilized society was built on the underlying foundation of logic. In classical Greece the visible universe became explainable, and thus the subject of intense study.

The idea of observing and explaining the universe was evident in the writings of Greek philosophers, and more visibly in the chisel marks of the sculptors of the classical period of Greece.

It was also not an accident that at the same period of time society in ancient Greece was organized around democratic principles with the city officials being elected by the demos (the community) who reserved the right to revoke their authority whenever they ceased to perform to the Demos’ liking.

Where to See Classical Art