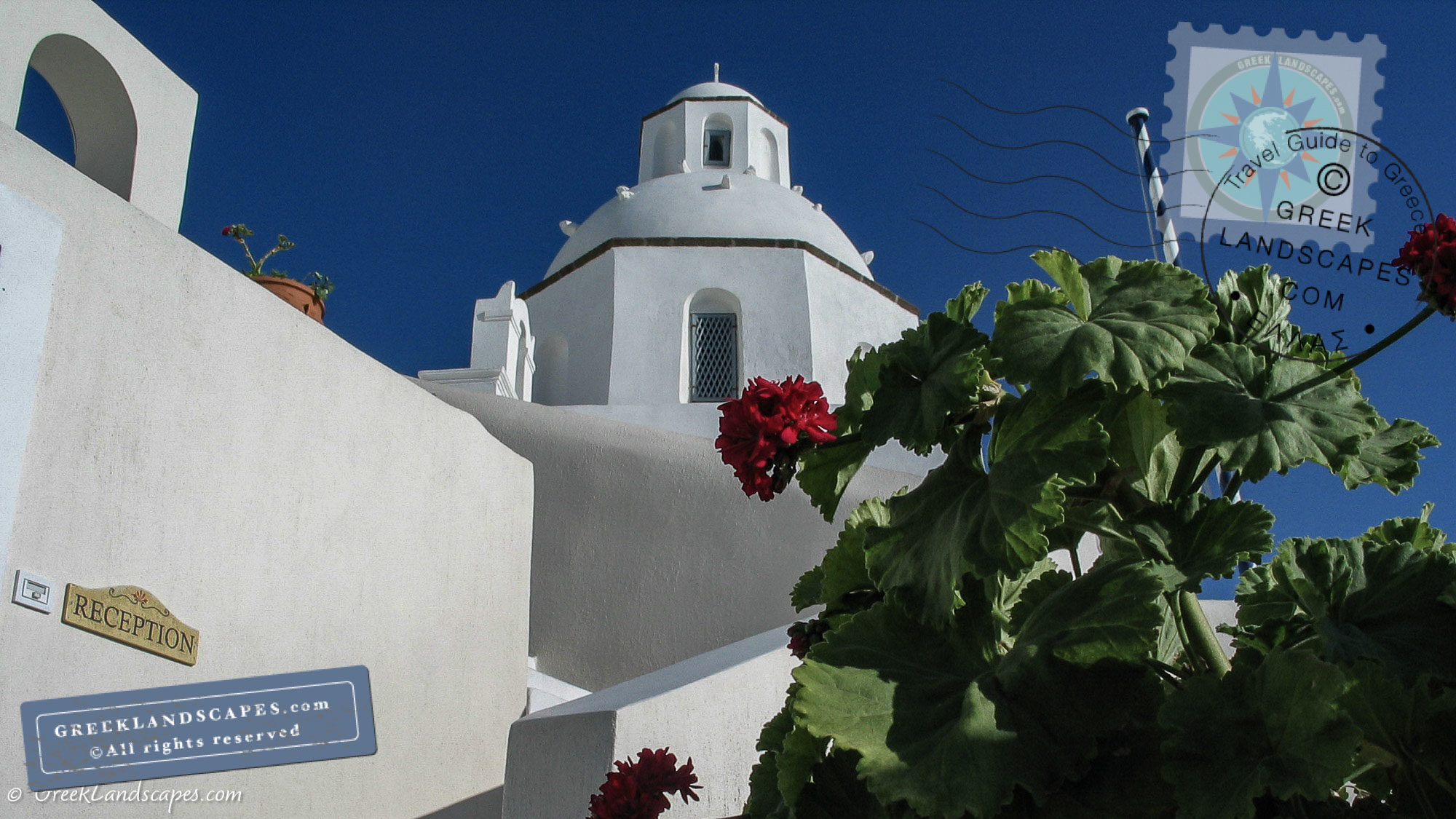 Our Best of Greece list includes the top travel destinations to help you plan a memorable visit. With so many candidates, compiling such a list is not easy. We include here both the most photogenic and culturally significant destinations. Read on, and choose a perfect spot for your vacation.

Our top choices are Santorini island and Nafplio on the mainland.

The combination of breathtaking topography and culture automatically elevate Santorini to a favorite destination. The island’s popularity is probably its only flaw.

Visiting in May or early June is better to avoid the crowds. Staying at a hotel in Ia, or in Fira atop the volcanic caldera is also imperative. The views are unforgettable.

Good beaches (Perissa, and Kamari), a great museum of prehistoric art, a unique excavation site at Akrotiri, and the far-out legend of Atlantis would keep any visitor happy.

If you were to visit only one island in Greece, we would recommend Santorini, mainly because of the unique landscape and experience.

Other islands like Crete, Corfu, Rhodes, Kefalonia are excellent choices, especially if you are looking for popular vacation spots.

Classy Town on the Mainland: Nafplio

Nafplio is a wonderful little town in the Peloponnese, popular adults, families, and couples.

It’s location in the middle of the most historic areas of Greece make it a great place to stay if you want to combine city life, swimming, and historical/cultural excursions.

If you like visiting archaeological sites, we recommend you spend at least a week in Nafplio.

From there you can visit ancient Mycenae, Epidaurus, Franchthi cave, Asini, and Nemea.

If you time it well, you can also watch an ancient Comedy or Drama in the ancient theatre of Epidaurus.

Acropolis (Ακρόπολις, akro+polis) literally means edge or point of the city. Throughout the centuries the Acropolis of Athens has embodied a much more significant position not just in relation to Read More

Ancient Olympia is a major archaeological site in western Peloponnese, at the south slope of Kronos hill. It developed over many centuries into a famous sanctuary which organized the original Read More

We rate Balos as the best beach in Greece because it ticks all the right boxes. The sand is expansive, soft, with white and pink hues. The invigorating sea, the Read More

Belegrina Beach is as far from Europe as you can imagine. It's located in the uninhabited island of Chrysi at the southern end of Crete. Despite the islands isolated nature, Read More

Corfu island (Kerkyra, Κέρκυρα) is rich in history and culture, it has beautiful old towns, excellent beaches, and a lush interior that has made it one of the top destinations Read More

Crete is the largest island of Greece, and it's packed with bliss for every style of travel. It has some of the best beaches in Greece, the food is out Read More

The Oracle of Delphi is one of the most important archaeological sites of Greece.  Its oracles influenced major and minor affairs around the Mediterranean for about 1200 years before it Read More

Egremni is one of the best beaches in Greece. It is so hard to access that it is never crowded, although it is so long that it would take thousands Read More

Elafonisi Beach is one of the best in Greece. We have rated it among the top-ten best Greek beaches because of the beautiful landscape, as well as the cleanliness of Read More

Falasarna (or Falassarna) Beach is one of the best in Greece. It is located in the west coast of Chania prefecture, in Crete, which is blessed with three world-class beaches Read More

Fanos beach in And Koufonisi does not have spectacular landscape, or great amenities, or the vast expanse of other popular beaches. What it does have is peace and quiet, soft Read More

The Heraklion Archaeological Museum houses the second most important collection of antiquities in Greece (second only to the National Museum of Athens), and the chronology of artifacts represent life in Read More

The palace of Knossos is the grandest of the four Minoan palaces that have been unearthed in Crete, and its complex architecture has been identified as the legendary "Labyrinth". Read More

Magic Beach is, well, a magical beach in an island that already boasts several other beautiful beaches. Kos island is an excellent destination if swimming and suntanning is your idea Read More

Meteora is a visual feast for the soul. The spectacular rock formations, crowned with 1000-year old monasteries connect the earth and the sky, allowing the monks' prayers to reach the heavens Read More

Myrtos beach is delightful in every respect. The coarse sand and the crisp are the main reasons we rate it as one of the best in Greece. It is in Read More

The National Archaeological Museum of Athens is home to some of the most beautiful art in the world. You will see amazing 2500 year old statues, and you will get Read More

Navagio beach in Zakynthos island is one of the best beaches in Greece, and one of the most spectacular-looking beach in the world. It will undoubtedly be one of the Read More

Papa Nero beach is a surprising delight at the eastern coast of Pelion mountain. It is located in Magnesia, in the mainland, and it is a hidden gem, so we Read More

Plaka beach is a long sandy patch to the south of Naxos chora. Beyond the busy northern end you will find plenty of space to spread out. It's sand dunes Read More

Psili Ammos is one of the best beaches in eastern Crete. It's wide, deep, and feels secluded despite being next door to one of the busies beaches of Crete, Vai. Read More

Santorini is the crown jewel of Greek tourism. It has spectacular cubist white villages spilled precariously onto the volcanic caldera's edge, and a rich history to boot. If you only Read More

Sarakiniko beach in Elafonisos island would enchant you with its soft sand and crystal-clear water. To the southeast, within walking distance you will find Simos beach. Both are excellent choices Read More

Vai beach lies at the east coast of Crete. Despite the long trip to get there, it is one of the most popular beaches of Greece. Vai is framed by Read More

No matter where you go in Greece, you will be near an archaeological site, and a museum.

The best of ancient Greece include:

If you only have time for one or two sites, choose the Acropolis and Delphi.

If you have time for two more, choose Mycenae and Epidaurus.

The Best Archaeological Museums in Greece

The National Archaeological Museum of Athens has the most extensive and important collection of ancient Greek art.

The Acropolis museum is the most impressive.