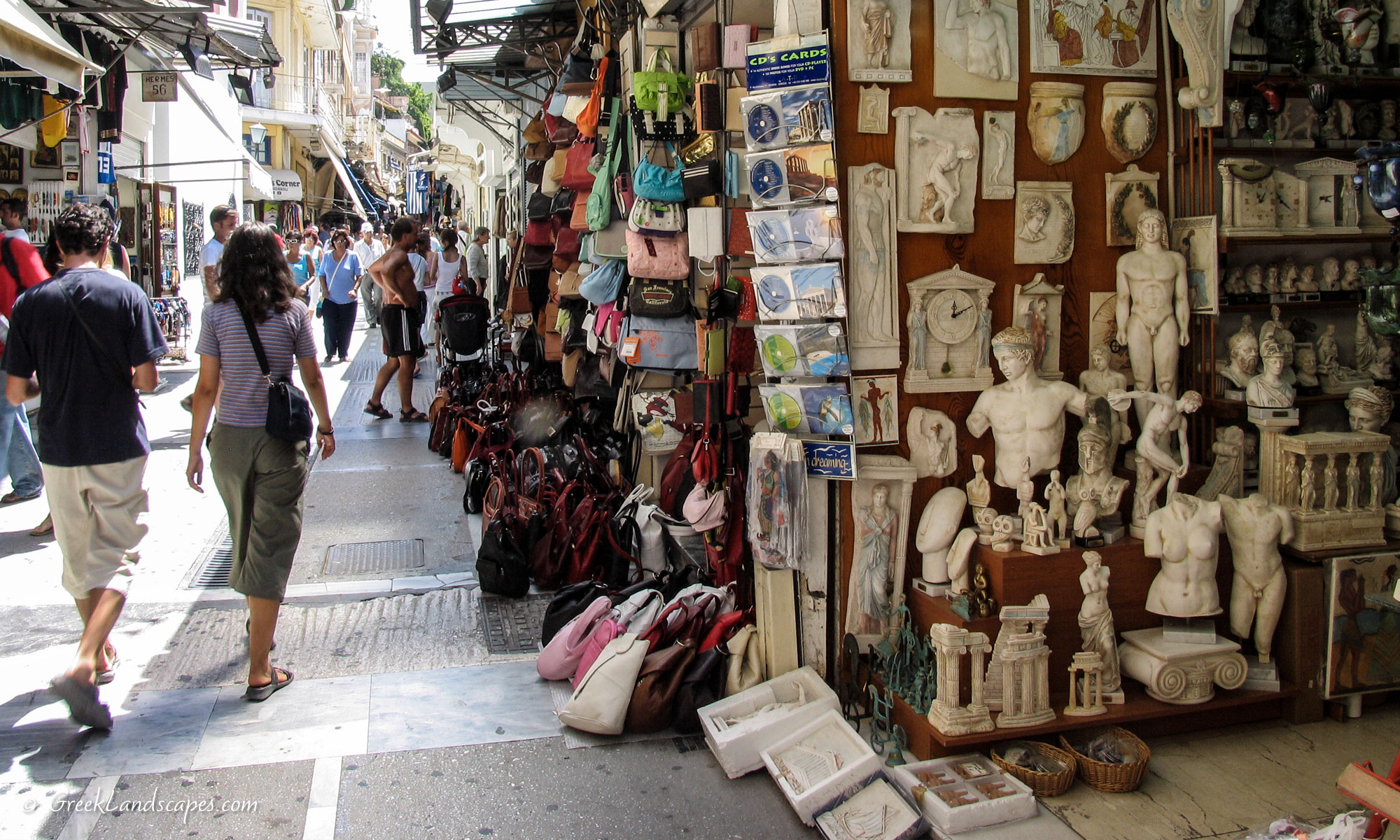 Athens (Αθήνα) is the beating heart of Greece today, but for a splendid moment 2500 years ago it lit the light of western thought that has been burning brightly for centuries across the globe. Democracy, Logic, the worth of the “individual” human, were among some of the most cherished concepts born in Classical Athens, and our guide to Athens here emphasizes this historical significance of the city.

Athens, the capital of Greece, is a large modern city which houses about 40% of the Greek population. 4.5 million inhabitants out of Greece’s total of 11 million call Athens their first residence. As such it is a busy city with lively streets, a full cultural calendar, and a healthy nightlife.

The city is the busiest transportation hub in Greece, so most likely Athens will be your first experience of the country, either as a short stop on your way to a Greek island, or as your final destination in itself. Either way, it can be a rich experience, and an especially unique one if you are interested in ancient history and culture.

What to See and Do in Athens

The vast metropolis will keep you busy with its historical and cultural offerings for months. But if you are only there for just a few days, we make it easy to find the best activities so you don’t miss anything important.

Read more about what to see and do when you visit Athens..

Our recommendations include world class museums and archaeological sites, as well as ideas for exploring the city, including three  free self-guided walking tours of Athens

We also include extensive reviews of beaches around Athens, because when in Greece, a day can’t go by without swimming.

History and Significance of Athens

Why is Athens important?

The ideas that were developed in ancient Athens are widely considered the foundation of western civilization.

Democracy, Theatre, Rational Thought, Logic, Philosophy, History, Trial by jury, the Olympics, Classical Art & Architecture, along with the foundation of modern medicine and scientific thought are a few of the most important achievements of ancient Greece.

From the Bronze age to Roman Administration

During this span of time that covers about 2000 years Athens was the epicenter of intellectual activity in the Eastern Mediterranean.

The achievements and ideas born in Athens during that time have direct or indirect influence to our own way of thinking and living our lives.

Athens was the only Mycenaean settlement that survived the mysterious rapid decline of all other cities of the era around 1200-1000 BCE.

The city continued its development through the Dark Age (1100-700 BCE), flourished through commercial activity in the Archaic era (700-480 BCE), and grew to become the envy of the known world during the Classical period (480 – 323 BCE).

Most of the characteristics we identify with the foundations of western civilization originated or reached their apogee in Athens during the Classical period.

It’s light continued to shine bright during the Hellenistic period (323-30 BCE), even as it was eclipsed in importance by other metropolitan centers of the era (Alexandria and Rome).

Athens continued to be an important center in the Roman empire, but it slowly declined over the centuries during Byzantine times and the prolonged Ottoman occupation, only to emerge as the capital of Greece in the middle of the 19th century CE.

At that time, Athens was a small town, but government incentives and policies elevated Athens to an economic engine for Greece after the 1960’s. Following the poverty-stricken postwar decades, rampant construction activity transformed Athens to the huge conglomerate of concrete and humanity we see today.

Presently, Athens is the seat of government and the commercial and cultural hub of Greece, but its streets are full of evidence of its passage through history. Ancient, Byzantine and Ottoman ruins, museums, and landmarks are sprinkled throughout the amalgam of shaped concrete that make up the modern city.

Athens is a year-round destination. It offers much more than sea and sun. The unique highlights of the city are its historical and cultural monuments, and they are available in all seasons.

If you are only going to Greece only to visit Athens, deep summer might be a time to avoid.

On the other hand, if you are going to Athens as a short stop on your way to and from a holiday resort, early summer would be a better option.

We break down the pros and cons of each season in the following pages, so click here to read more details about the best time to visit Athens

Getting to and From Athens

Athens airport is a small affair compared with other modern international airports. It was build right before the 2004 Olympic Games, it has only one terminal, and it’s very clean and functional.

Eleftherios Venizelos airport in Athens handles the vast majority of air connections to the rest of the mainland and the islands. It’s about one hour away from the center of Athens by train, or thirty minutes by car.

Athens is the main hub for all the ferries that visit the Greek islands, so it has several ports, the largest of which are Pireas, and Rafina.

If your final destination is a Greek island, most likely you will be sailing from these two ports.

Read more about the Ports of Athens

Travel To and From Athens via Bus or Train

The cheapest way to travel from one city to the next in Greece is via intercity bus or train. Train lines are sparse in the mountainous country, so busses handle the majority of travelers.

Read more about intercity bus and train stations in Athens

By far, the best way to get around Athens is by Metro (or Attiko Metro, or subway, or tube). It is safe, clean, punctual and connects all major areas of Athens with subterranean and open air trains.

You can get around comfortably by Metro, by bus, or by tram where you can use the integrated ticket.

The Attiko Metro connects the center of Athens to the suburbs, and to other transportation hubs like the airport, the train station, and the port of Pireas.

Each Metro station is adorned with the art of contemporary Greek artists, and in certain cases the subterranean station walls offer glimpses of ancient artifacts.

For example, the Monastiraki station has an open area where one can see the ancient sewer pipes.  The Syntagma station has on display a host of ancient artifacts, unearthed during the construction of the Metro station there, and a glass-wall with a representation of a subterranean cross-section with embedded artifacts and graves. The Acropolis station sports copies of the Parthenon sculptures. 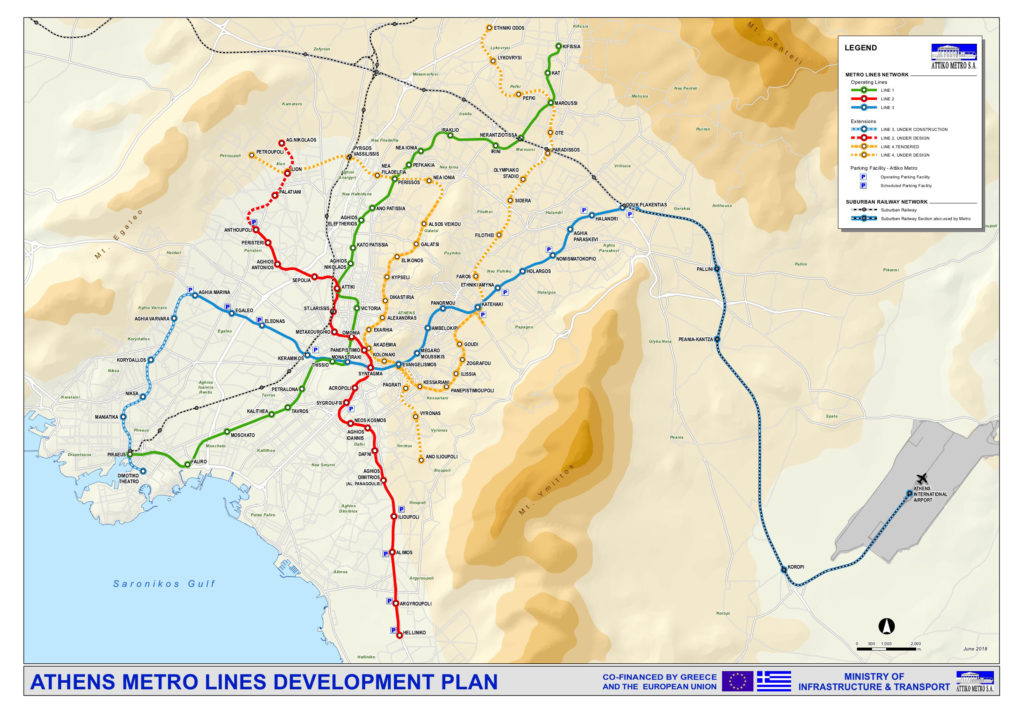 Click here to see, or print, the map of Athens Metro (pdf)

To get to places that are not served by the Metro lines, you can utilize the myriads of yellow taxis that roam around the streets of Athens.

To flag a taxi, stand on the edge of the sidewalk, and raise your arm as high as possible with the intent of catching the taxi driver’s attention.

The entire city of Athens is also served by a labyrinthine network of buses, trains, trams, metro, and trolleys. To find a route or a bus number, visit the Athens Urban Transportation Organization but be prepared for long searches. Better yet, use google maps to search for bus routes.

Last, we advise that visitors never attempt to rent and ride a moped, four-wheeler, or motorcycle in the streets of Athens unless you like living dangerously.

If you still must drive in Athens, it’s a complicated affair, so we created an entire page on the subject. Read more about driving in Athens.

Where to Eat in Athens

You will be bumping into eateries everywhere around the popular areas listed above, but you will find the most enchanting restaurants with views of the Acropolis in the Monastiraki and Plaka districts.

The entire section of Adrianou pedestrian street that starts behind Monastiraki station and ends at Thesion metro station, is lined with cafeterias and restaurants sandwiched between ancient Athenian ruins and with good views of the Acropolis.

Our favorite spot is MOMA restaurant. You don’t have to eat if you are not hungry. You can simply order a beverage, a small snack, or desert, and don’t forget to go to the bathroom downstairs. Yes, the bathroom!

Not unlike several other restaurants in the area, the building that houses MOMA was built on top of ancient ruins, and you can see them under the glass floor of the basement bathroom. How is that for a unique experience?

For fresh fish restaurants, take a taxi to the little port called Microlimano near Pireas where you will find many (pricey) fish tavernas overlooking the quaint fishing port.

Microlimano (or Tourkolimano) has the feel and look of a Greek island port, and it’s lined with pricey fish restaurants but not much else.

While Athens itself can fill a complete itinerary with exciting venues and activities by itself, there are several trips worth taking around the capital. Around Attica you will find plenty of little towns and seaside resorts for day-trips, and of course a host of archaeological sites to keep you busy.

Click here to see Athens with our place marks on Google Maps, and to get directions in a new window.