You will most likely find yourself in Athens for a period of time when you visit Greece. Even as a short stop on your way to and from your final Greek destination, the vast city offers some of the most spectacular ancient history and artifacts  in the world.

We have chosen four venues here as the best to see in Athens because they offer a unique experience, the likes of which you can never match in any other city on this earth.

You can see beautiful architecture and city planning in other world cities, and more fashionable districts in other country capitals.

You can also find “best of Athens” lists better driven to promote sales by travel agents all over the internet.

But you will never be engulfed by the birth and purity of western civilization as you can in the Athenian streets. To be in Athens is to be engulfed in 3000 years of  history. That’s why our choices here have a vivid, ancient hue.

The Agora, the Acropolis and the two major museums offer a glimpse into a civilization that flourished in ancient times and which changed the world with it’s cultural output.

The Acropolis of Athens is a rugged rock in the middle of the city and in ancient times it housed some of the most beautiful buildings and sculptures on its plateau. It also functioned as the spiritual and financial center of a city that became the foundation of western civilization.

Read our information about the Acropolis for travelers

The evolution of ancient Greek art, and it’s role as a beacon for the subsequent artists of all ages is clearly outlined in the Acropolis museum.

There, observe the morphing of the enigmatic smiles to an austere gaze of the Kore (archaic female statues), and the transformation of generalized geometric forms of earlier Greek sculpture to fluid anatomical features on the human bodies of the post-500 BCE eras.

To get to the Acropolis museum, use the Metro and get off at the Acropolis station which is located on the NE corner of the museum complex.

Read more about the Acropolis Museum

Below the Acropolis rock you can wander around the streets of the ancient Agora of Athens (αγορά = marketplace). This lively, ancient marketplace was the heart of the thriving city of Athens and. it functioned both as an economic engine and as an intellectual playground where concepts such as Democracy were born.

In the archaeological site you can also visit the Agora museum

Within walking distance to the east lay the ruins of the later Roman Agora and Hadrian’s Library. They both intertwine with the Monastiraki area where you can stay, eat, and shop in the outdoor bazaar and restaurants at the feet of the Acropolis rock.

To visit the Agora of Athens, use the HSAP train (connects with the Metro) and get off at Thesion.

Read more about the Ancient Agora

While in Athens, don’t neglect to visit the National Archaeological Museum which houses some of the most spectacular artifacts from many ancient Greek sites.

While the recently built Acropolis museum takes the lion share of tourist publicity (for good reason), the National Museum’s collection will give you a wider overview of the 2000 years of ancient history.  Its collection of Mycenaean, Archaic, Classical and Hellenistic art is truly superb.

The museum houses art from prominent archaeological sites throughout Greece, such as Epidaurus and Dodona. It also displays the best known artifacts from the Cycladic civilization, and its collection is equaled only by the Museum of Cycladic Art, also located in Athens.

You can stroll through its expansive collection in an hour or two, but multiple visits are a must for more serious study of ancient Greek art.

To visit the National Museum, use the HSAP train (Metro) and get off at Victoria station. Then walk about five minutes to the museum. The area around Victoria has become a bit “gritty” in the last ten years, so alternately, you may opt to use a taxi from you hotel to get to the museum.

More Things to See and Do in Athens

Besides the above must-see ancient sites and museums, Athens offers a number of venues that showcase different parts of it’s 4000 year old history.

All of the above, with the exception of Pireas Museum, Sounio, and Lavrion are located around the historic center of Athens, and within reasonable walking distance from each other. You can easily visit them all in a couple of days.

But there are other things that you can do while in Athens: 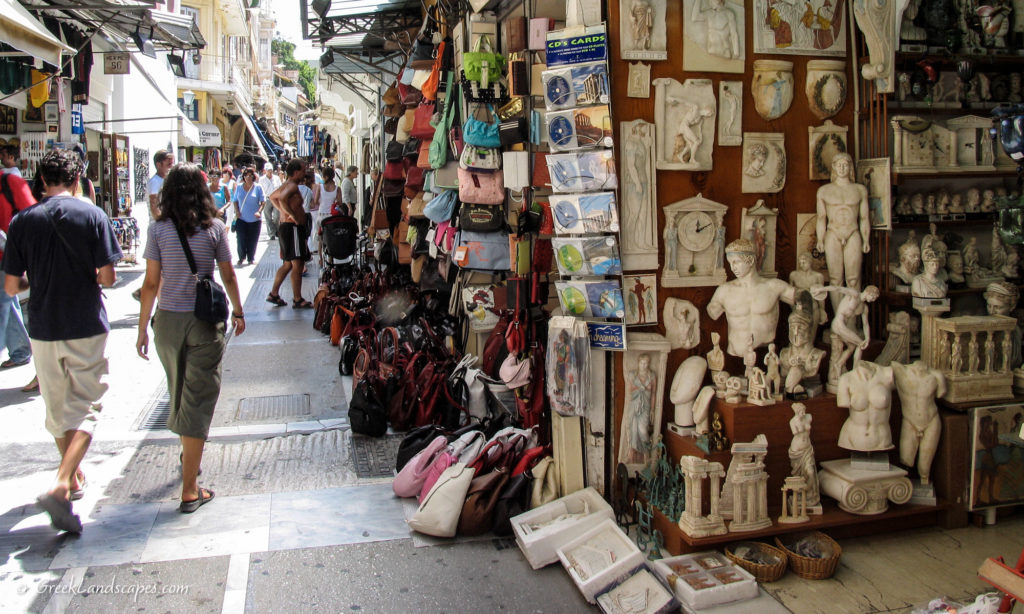 Athens has many places designed for people to stroll leisurely, many of which offer extensive pedestrian streets that offer reprieve from the traffic and noise.

Nice places to walk around, have a drink, coffee, or a meal include the Thesion area, Monastiraki, Plaka, Psiri, Kolonaki, and Syntagma square. All are accessible by Metro.

You would need to walk a little farther, or take a taxi to visit Lykavitos hill for panoramic views of Athens.

Walking around the historic center of Athens is a unique experience that can be enhanced if you know a little bit about the monuments and sites. So, we created several virtual walking tours to help you visualize yourself as you plan your trip, or to follow on your cellphone as you walk around Athens.

These free, self-guided walking tours  are designed to take you through the most important and historic places of Athens.

See our, free self-guided walking tours in the historic center of Athens

You can safely cross Omonia square from your list of places to see.

Omonia was the heart of Athens up to the mid 90’s, and many tourist guides still feature it as an attraction and a destination.

But the area around Omonia has taken a turn for the worst in the last years with high crime rates and grimy streets unsuitable for leisurely walks.

The good news is that there is absolutely no reason to visit Omonia, so you won’t be missing much by not including it in your itinerary.

There are several nearby areas that you can stay away from. You can read more about the subject in our Safety in Greece page.

Does Athens have a beach? It’s a question many visitors ask when they visit in the summer. The answer is, yes, there are plenty of beaches in and around the greater Athenian coast.

Choosing a suitable one is a bit more tricky. The basic rule is, the farther away you can drive, the better the chances of finding a very pleasant beach.

Also in general, the beaches around Athens are not of the quality you find on the islands, but many are more than pleasant to spend a day at.

A good alternative is to choose a hotel with a swimming pool. Look for hotels around the center of Athens that have a rooftop swimming pool and bar.  This way you can cool off with the Acropolis in your sight.

Read our guide to the beaches of Athens

The zoo of Athens, or Attica Zoological Park, is a pleasant place to spend an afternoon, especially if you are traveling with children.

Attica Park is located in the outskirts of Athens near the airport, so it could be a good place to visit if you have a long layover.

The zoo exhibits a variety of animals and exotic birds, in a pleasant environment that allows the animals to live in relative comfort in places approximating their natural habitat.

There are several species native to Greece on display, like the Skyros horse, but there is no dedicated “Greek fauna” exhibition.

The zoo was built in 2000 by Jean-Jacques Lesueur, and it belongs to the European Association of Zoos and Aquariums. As such, it conforms to the association’s standards for the humane treatment of the animals, and the education of the visitors.