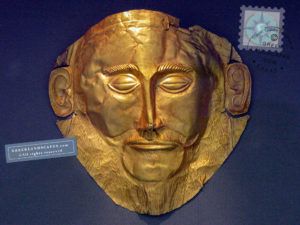 Mycenaean funerary gold mask. Found in Tomb V in Royal circle A at the Acropolis of Mycenae. Unearthed during excavations at Mycenae in 1876 by Heinrich Schliemann who believed it to belong to the Homeric hero Agamemnon.

Later dating however placed the mask to 1580-1550 BCE, about three hundred years earlier than the time of Agamemnon.

The name stuck though, and many refer to it still as the “Mask of Agamemnon”.