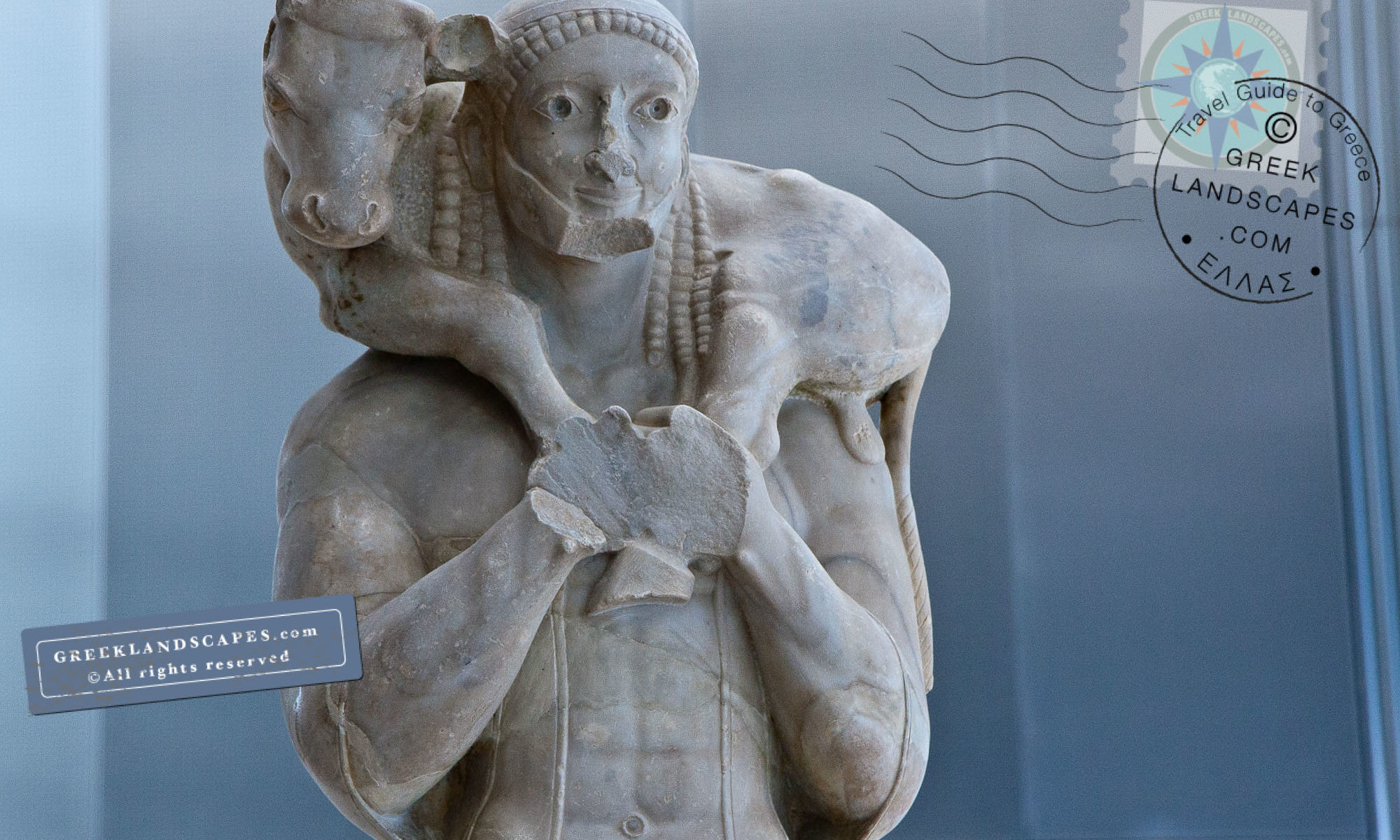 The Archaic Sculpture sculptures are silent witnesses to the extraordinary development western society was about to undertake. The Kouros and Kore statues stand before a cultural revolution, all muscles tense, like a spring about to burst with energy into an extraordinary wave of classical art and intellectual development. Their smiles are frozen with meaning as if they knew what was about to occur.

The Gorgon pediment form the Archaic temple of Artemis is the oldest known stone pediment in Greece.

Kouros from Anavyssos, is a funerary monument for a youth named Kroisos

The Kouros statues dominate the Archaic period of Greek Art. All of the Kouros (male) and Kore (female) statues represent state sponsored subjects or are designed as decorations of religious buildings, or as immortal reminders of the virtues of a deceased.

However, secularism begins to become evident with Archaic Greek art and culture in a subtle way as the artist,s and art patron’s names appear carved on some sculptures, and also in the way that the personal virtues of affluent individuals become the underlying subject of archaic statues temples and sanctuaries.

The stylization of the different figure planes along with the rigid poses allow the sculptor an easy way to create the human figure since all he has to do is follow a well established traditional formula in order to represent the different parts that comprise a human figure.

The frontal pose, the left foot extended forward, the arms attached or close to the hips, the rigid pose, and the mysterious smile are all characteristics of the Kouros and Kore statues of the Archaic period. T

he sculpture of the Archaic Greek style is evidently influenced by ancient Egypt as the commerce between the two countries was flourishing.

During this period the sculptor worked almost exclusively with “point” chisels, punches and stone abrasives to create the statues, and this technique did not allow for much flexibility in regards to the pose or surface qualities.

As a result of this technique, all marble statues from the Archaic period have an opaque appearance despite marble being a somewhat translucent material.

This is a result of the repeated vertical blows to the surface with a point chisel which sends concentrated shock waves deep inside the stone, shuttering thus the marble crystals in considerable depth.

The surface of the marble or its translucent qualities were not a concern of the ancient sculptors however. All statues of ancient Greece were in fact painted with vivid colors and the technique of the vertical blows actually keyed the surface for the pigments.

While the poses and techniques of art creation did not allow for much deviation from the rigidly posed figure, the preoccupation of the ancient Greek culture with secular matters is betrayed in the linguistic elements that accompany the statues (writing on the base, epitaphs, descriptions,) and in the context in which much Archaic art is presented.

The intervention of the supernatural for matters of earthly convenience is often evident in the dedication of artifacts to deities.

Where to See Archaic Statues