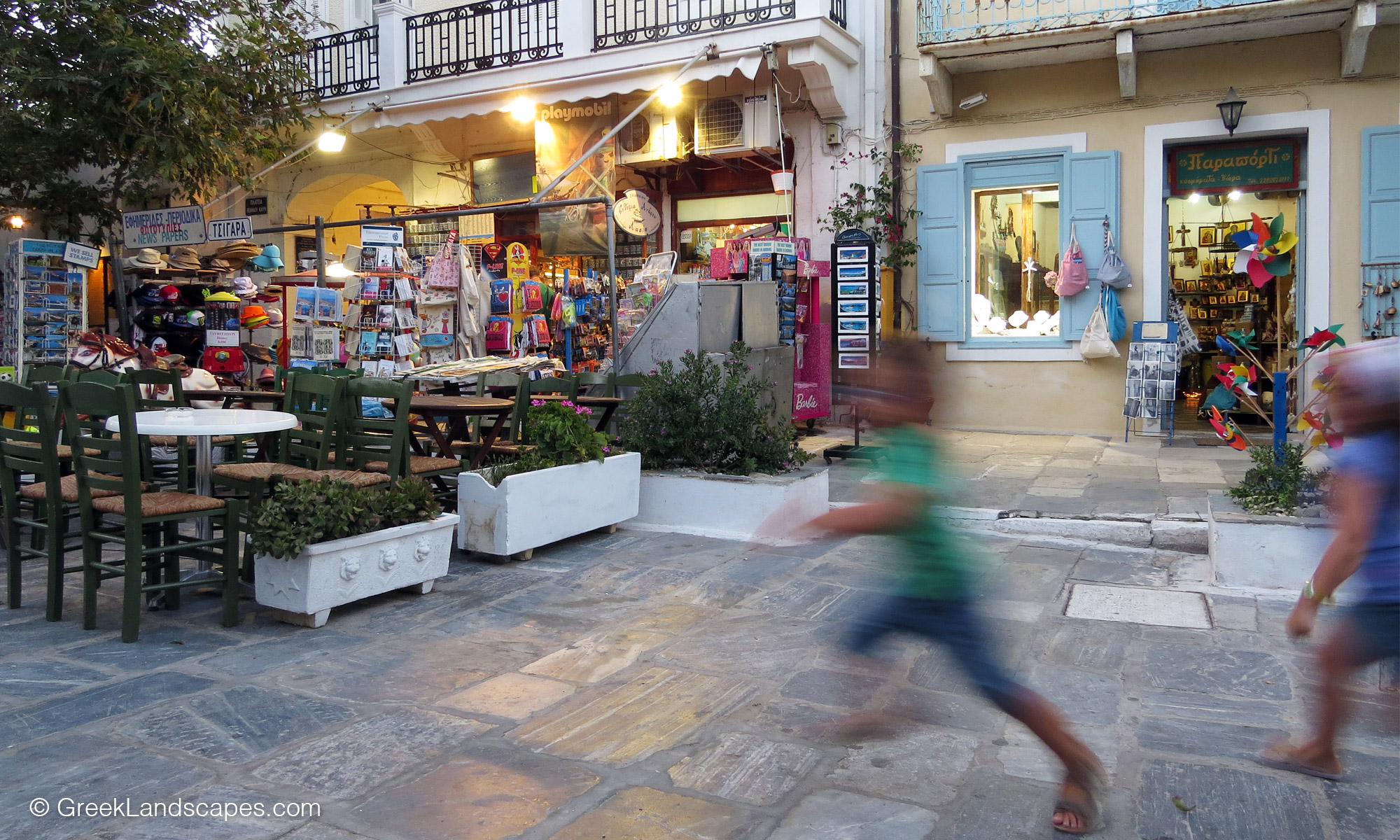 Its proximity to Attica makes it an ideal destination for a quick weekend vacation, and the quiet character of Andros island is conducive to an even longer relaxing holiday.

Despite the short two-hour trip from Rafina (about half an hour away from Athens), Andros island has remained under most tourist radar screens. Most of the island hums a rural Greek tune, and only a couple subdued tourist spots on the east coast act as reminders that it is an Aegean island.

If you are looking for an island that feels “Greek” and is less “touristy”, Andros fits the bill nicely. A stroll along the busy Chora (Andros town) brings you among families of local or visiting Greeks, in an atmosphere similar to any non-touristy Greek town.

Legend among Greeks have it that the locals (meaning the shipping tycoon families of yesteryear who made Andros their favorite island nest) don’t really desire or need tourism, so it’s an industry that they haven’t catered to.

But don’t let such legends keep you away from Andros. You will feel perfectly welcome and treated to a more genuine Greek hospitality in an island full of class and good taste.

Children play on the streets of Andros Chora

The statue of the Unknown Sailor in Andros island.

Andros coastline from the ancient town of Hypsili

What to See and Do in Andros Island

The Tourlitis lighthouse marks the entrance to Andros Chora. Andros became a significant maritime power during and after the war of independence of 1821. The lighthouse was built in 1887 and was the first one of the Greek automatic lighthouse system.

The main street of Andros Chora is full of life at night. The main street comes alive as soon as the sun goes down with Greek families, children playing, and tourists who stroll and pack the outdoor cafés and restaurants. Life on the streets begins to pick up after 10 or 11 in the evening.

The Archaeological Site of Ypsili

The only archaeological site that’s open to the public is Ypsili, just south of Batsi on the west coast of Andros.

The ruins at Ypsili date from the Geometric and Archaic eras (9th -5th c. BCE), and besides an expanse of building foundations, there is not much else to see on the wind-swept hill that overlooks the Aegean.

The site was protected by a thick wall that reached about 7 meters on the east side. The excavated town is a rare example of Archaic town planning in the Cyclades.

At the center of the acropolis, a sanctuary was probably dedicated to Demeter and was active between 8th and 5th c. BCE. An inscription marks the spot of it, and other significant buildings on the archaeological site, but otherwise it’s difficult to decipher the low ruins without a high vantage point through the uncleared brush.

A ticket to the site costs 2 Euro and gets you admission to the site and a brochure with the history of the place. A leisurely visit would take about 15-20 minutes over a very rough terrain that makes up the visitor’s path.

When visiting, wearing sturdy shoes is in order, and we would not recommend the site for those with mobility issues.

During our visit in the summer of 2013 the site was so windy we could barely stand on our feet as we wandered around the site with a nervous guard following our every step, so choose a windless day for your visit if possible.

Andros is home to two Archaeological Museums of note – one in Andros Chora and one in Paleopoli south of Batsi, a renown museum of Modern Art, and a Maritime museum both in Chora.

The small museum at Paleopolis (free entry) exhibits artifacts from the nearby excavations of the ancient capital of Andros.

Just like the majority of Greek destinations, summer and spring is the best time to visit Andros, with May-July being the optimum months. In August the island is visited both by the strong Meltemi winds and all the Athenians who own vacation homes on the island so it gets very crowded.

Getting to Andros Island and Getting Around

Best way to get to Andros is by ferry from Rafina. In the summer, there are at least five ferry departures for Gavrio (2 hours) and tickets cost 16 € for adults, and 42 € for a car when we visited. You buy tickets at the port of Rafina.

There are plenty of rooms for rent on the island and several holiday resorts, most of which are in and around Batsi and near Gavrio.

A two-day visit with a rental car would be perfectly fine to explore most of the island if you are on an island hopping trip.

Renting a car would be your best option, but be aware that the roads are hard to drive on.

If swimming is your pleasure, there are plenty of beaches in Andros island to keep you happy. The largest ones are close to the rudimentary roads and small towns, but some are way out of the way.

As a rule of thumb, in the summer the beaches of the west coast are better sheltered by the northern winds that can be very strong on the eastern coast of the island.

Our favorite beach during our visit to Andros island was Delavoyas beach, a little to the south of Batsi town. Its soft golden sand lines a cozy rocky cove a easily accessible on foot through the stone steps on the side of hotel Aneroussa.