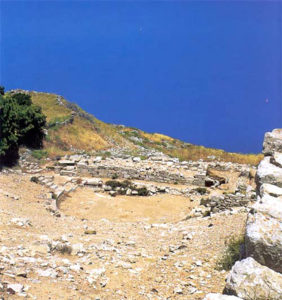 The theater of Thira (Santorini) was built in Hellenistic times. Its small caves barely holds 1500 spectators. It was repaired and modernized in Roman times. It is near the entrance to Ancient Thera, which is on the highest peak of Santorini, so the views of the sea behind the theater are magnificent.