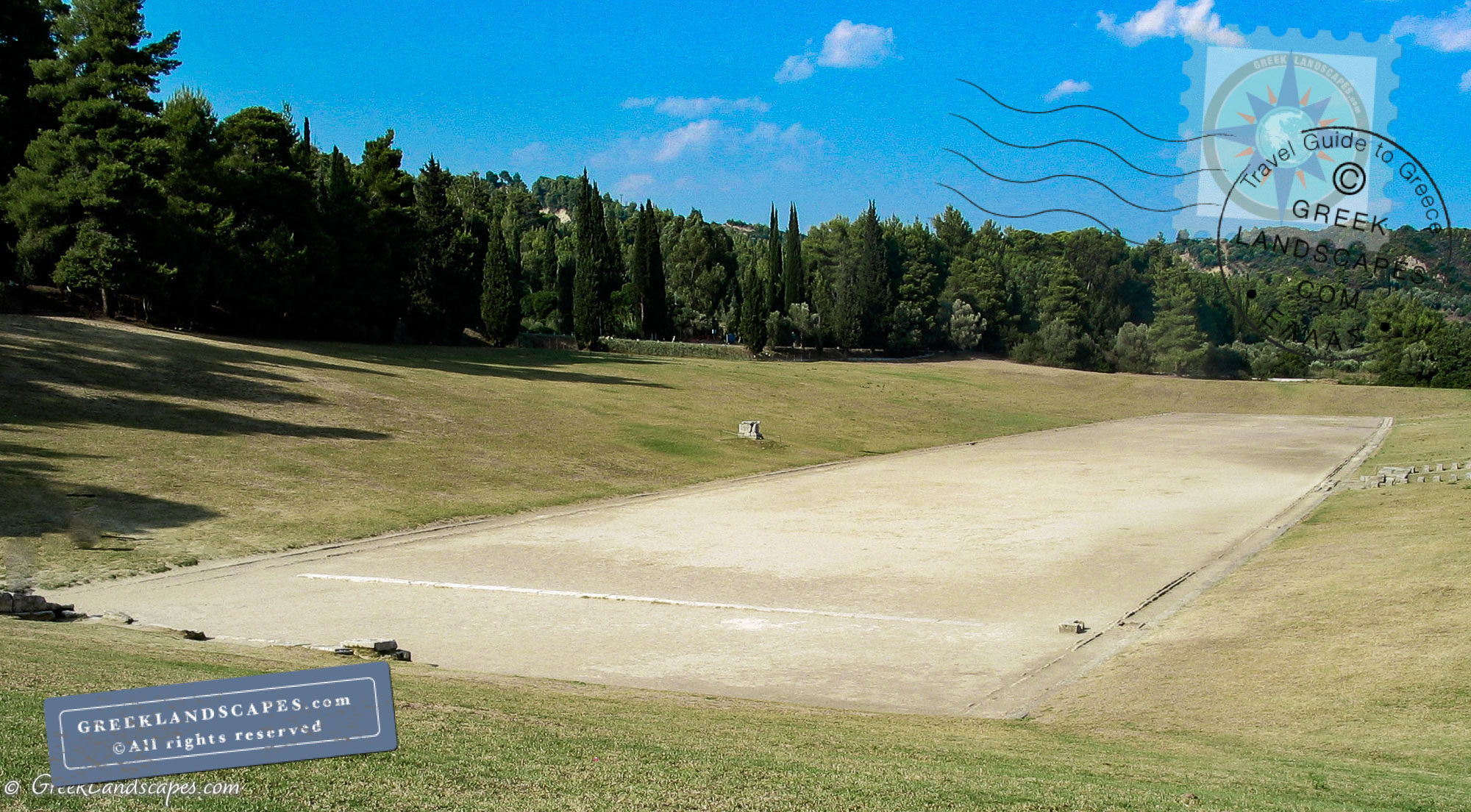 Ancient Olympia is a major archaeological site in western Peloponnese, at the south slope of Kronos hill. It developed over many centuries into a famous sanctuary which organized the original Olympic games.

The columns of the Temple of Zeus collapsed during an earthquake. Ancient Olympia, Greece

One of the masterpieces of ancient Greek art: Hermes of Prexiteles, c. 340 BCE

Doric column of the temple of Hera. Ancient Olympia, Greece.

Pheidias workshop in Olympia. It was later converted into a Christian church.

Ruins of a Roman building at ancient Olympia.

The arched roof of the Krypte. It was the official entrance into the Olympic stadium.

This was where athletes trained for the Olympic games. Ancient Olympia, Greece.

Ancient Olympia is located at the west end of the Peloponnese peninsula in the midst of a fertile plain between the rivers Alphonse and Kladeos. It is 20 minutes by car from the modern town of Pyrgos.

The history of habitation in Olympia is lost in prehistoric times, but buildings have been unearthed dating as far back as the middle Helladic era (1600-1900 BCE).

A multitude of deities were represented there during the bronze age. It is believed that the first god worshiped at the sanctuary was Kronos.

The worship of Kronos was replaced by his son, Zeus, about the same time that Doric tribes replaced the Mycenaeans in the Peloponnese around 1100 BCE.

Consequently, the largest temple at the center of the Olympia sanctuary is thus dedicated to Zeus.

For us, ancient Olympia is significant as the birthplace of the Olympic games, and of course for its exceptional ancient Greek art and architecture.

Olympia is the birthplace of the Olympic games which began on these very grounds.

In the year 776 BCE the first Olympiad took place at the sanctuary of Zeus and repeated every four years for centuries thereafter. T

he date of the first Olympic games (776 BCE) is the first accurate chronology of historical Greece since the names of the victors were faithfully recorded and the ancient Greeks measured time back to the centuries by referring to the different Olympic games.

The Olympic games were a tradition that endured centuries of time emanating a feeling of unity through competition that galvanized the independent Greek city-states into a coherent cultural entity.

The games were so important to the Greeks that they put aside their traditional differences, and even went as far as ceasing open hostilities in war time in order to compete in the Olympics.

The tradition of togetherness helped the Greek colonies retain close ties with mainland Greece, and acted as a catalyst for the development of what we now know as the Hellenic contribution to the birth of Western civilization.

Winning an Olympic event was an honorable endeavor for any Greek athlete. Upon winning, his home city would tear down part of their defensive walls as a gesture of confidence in the ability of its defenders.

Victory in the Olympics was one of the highest honors bestowed upon a mortal, but besides a crown made of olive branches and an allotment of olive oil no other material reward was afforded to the winners.

One of the pivotal points of Greek thinking was the nobility of man as a free being who can overcome all obstacles in search of virtue.

The Olympic games, in their own unique way, aided the formulation of the kind of intellect that searched for answers in nature, and a respect for rules that made co-existence of free men possible.

It is not hard to imagine how the Olympic games cultivated the collective consciousness of the Hellenes looking at the ruins which span several hundred years as they stand silently among the low trees at Olympia.

The temple of Hera with the oversized Capitals on the Doric columns dates back to Archaic times (built in the 7th c. BCE), but most of the buildings visible today – including the Temple of Zeus – were built during the Classical era.

Some of the structures you see when you first enter the sanctuary were built later in Hellenistic times while some of the better preserved buildings were Roman and Byzantine creations.

The Olympic stadium along with the hippodrome which is now buried under the olive groves to the southeast were the main venues where athletic events took place.

It is presented today as it was in ancient times with its flat terrain where the athletes competed, and the grassy slopes where the spectators used to sit.

In the middle of the long sides you will see the stone stands where the Hellanodikes (literally”the judges of the Hellenes) stood.

You will also see the marble starting blocks which break the monotony of the stadium’s plane. It’s an austere arrangement, fitting of a people who cherished virtue born of humility without excess.

In ancient times Greek men from all corners of the Mediterranean made the pilgrimage to Olympia to pay tribute to Zeus, to forge friendships and alliances, and to enjoy or compete in poetry, music, and athletic events.

In the center of the sanctuary the remains of the imposing temple of Zeus anchor the surrounding landscapes with the monumental building foundation and the scattered massive columns which once protected the gold and ivory statue made by Phedias.

The temple of Zeus’ proportions and imposing scale is surprising given its small 27.68 x 64.12 m footprint. The temple’s Doric columns are scattered like dominoes about the raised foundations but in ancient times they supported one of the most impressive pediments of any Greek temple.

The pediment statues depict the race between Pelops and Oinomaos (East pediment) and the dynamic composition of the Centaurs abducting Deidameia on the West.

Presently the statues are beautifully reconstructed inside the nearby Olympia museum alongside the metopes of the temple of Zeus, in one large room.

The west pediment of the Temple of Zeus describes the fight between the Lapiths and the Centaurs.

The Temple of Zeus east pediment depicts the chariot race between Oinomaos and Pelops.

A remarkable find, the helmet dedicated by Milteades at Olympia after he led the Greeks to victory against the Persians in the battle of Marathon.

The famous Hermes of Praxiteles statue. At the ancient Olympia Museum, Greece. Circa 340 BCE.

Once in Olympia, don’t neglect to visit the archaeological Museum. It is within walking distance from the Archaeological site.

The museum exhibits some of the best ancient Greek art and artifacts you would find anywhere. In terms of content, it’s one of the top five archaeological museums in Greece.

There you will see masterpieces like the pediment and metope sculptures from the Temple of Zeus, and the famous Hermes of Praxiteles statue.

History buffs will drool over the bronze helmet dedicated by the Athenian general Miltiades to Olympia. He  after he led the Greeks to victory in the battle of Marathon. It is inscribed “ΜΙΛΤΙΑΔΕΣ ΑΝΕ[Θ]ΕΚΕΝ [Τ]Ο ΔΙ” (Miltiades offered to Zeus).

Another exciting artifact on display is the cup inscribed “Φειδια ειμι” (I belong to Pheidias), and it confirms the location of his workshop when he was at Olympia to create the Temple of Zeus sculptures.

For the visitor, Olympia is one of the sites that should be included in any itinerary of Ancient Greece sightseeing.

It is one of the easiest archaeological sites to traverse since it has fairly level wide paths to walk through, lavatories, and plenty of shade under the many trees.

You can get to Olympia by bus from Patra. From Athens, there is no direct bus to Olympia.

If you are traveling from Athens, take the bus from Athens to the nearby town of Pyrgos (about 4 hours), and change to a local bus to Olympia (about 20min).

Presently, there is no english version of the bus website, but you may get information by calling +30 2621-020-600 (this number already includes the country code for Greece).

By rental car, the drive from Athens to Olympia takes about 4 hours, so an overnight trip is recommended. You will be driving on a modern highway for the most part, so the drive is comfortable at least up until you get to Patra.

The archaeological site and museum are within walking distance from the modern town, Olympia. Take the provincial road (about 5 or 10 minute walk.) and there is usually plenty of free parking if you drive there.

What to Eat At Olympia

One of our favorite places to eat is Venus restaurant about 4 km before one reaches Ancient Olympia through the national road.

The food is excellent, the large air-conditioned room perfect, and the swimming pool is a great place to cool off.

The restaurant is only open for lunch and seems to be a favorite stop for just about every tour bus that visits Olympia.

The nearby modern town of Olympia is well suited to host visitors. It has some very nice hotels, a plethora of restaurants, tons of tourist shops, and some nice beaches within a half hour drive.

Modern Olympia is a sleepy town (similar to Delphi sans the spectacular views) with a couple of main streets lined up with back to back tourist shops and restaurants.

We do not usually give specific hotel recommendations unless we had a positive personal experience in one.

We liked hotel Europa which is a subsidiary of Best Western. It is on the higher price scale, but we would stay there again when visiting Olympia. The view from atop the hill is excellent, the service is immaculate, and the buildings are clean and well maintained. It has a large swimming pool and it is located a bit out of town.

The nearby Olympia hotel also looked like a good choice with comparable accommodations.

Map and Satellite View of Olympia