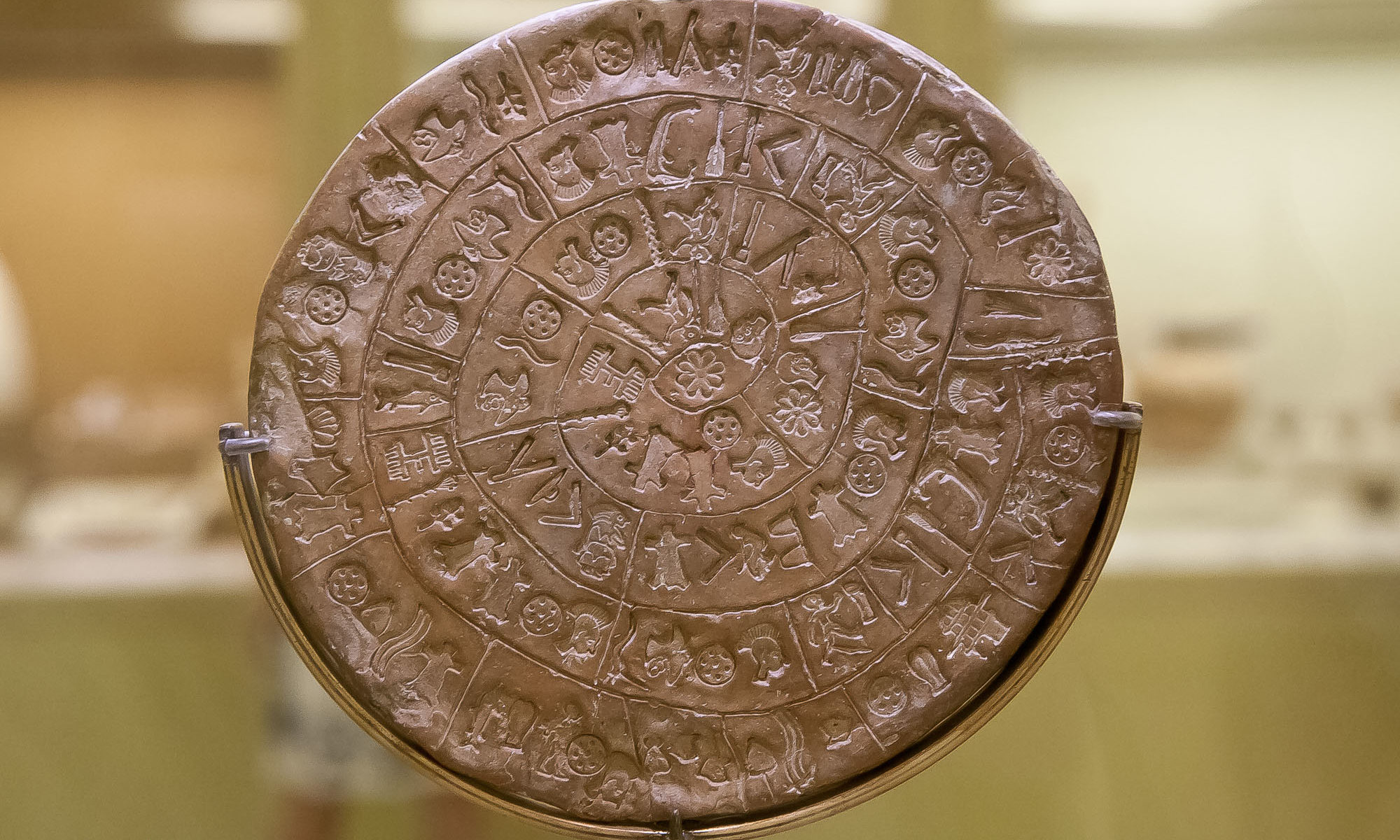 Ancient Crete is home to the Minoan civilization, which was the first advanced civilization of Europe. The rich history of Crete has left the island sown with hundreds of archaeological sites, large and small.

The Minoan Snake Goddess statuette was found in the Knossos’ temple.

The gold Bee Pendant from Malia.

The Phaistos disk is made of baked clay and it was found at the palace of Phaistos.

The Archaeological site of Phaistos

Typical reconstruction at Knossos. The palace was the most important Minoan center in Bronze Age Crete.

Clay tablet with Linear A script.

Minoan statuette depicting a bull-leaper. Made of ivory.

The Minoan civilization flourished in the Bronze Age (circa 3000-1200 BCE), and it is credited as the first advanced European civilization.

The Minoans dominated the Aegean with their powerful navy and trade. Their art and culture influenced mainland Greece and especially the Myceneans.

They traded with the Aegean islands, with Egypt, Asia Minor, and the Levant.

The island of Crete reached its zenith during prehistoric times when the Minoan civilization dominated the Aegean and produced a fascinating culture which in turn has left behind a plethora of beautiful art and architecture.

Once the Minoan culture fell into decline, the Mycenaean powers of mainland Greece controlled the island for about 200 years. After that, the history of Crete follows the traditional Greek history. The Romans established their authority and ruled Crete afterward.

By far, the most spectacular finds are the Minoan palaces of Knossos, Phaistos, Malia, and Zakros, while the most important artifacts found in excavations are housed in the Heraklion Archaeological Museum. This museum’s collection is complemented by museums in the towns of Agios Nikolaos, Chania, and Sitia.

If you love ancient civilizations and history Crete is a huge playground with an archaeological site, a museum, a tomb, or a legend around every bend of the road. Here is a brief description of the most important sites to visit:

Knossos is the most spectacular Minoan palace in Crete.

It is also one of the most visited archaeological sites in Greece.

Phaistos is the second largest palace of Crete, and it’s arguably the most beautiful of all the Minoan palaces. It is one hour driving distance away from Heraklion in the Messara plain to the south.

The ruins at Phaistos span several Minoan eras, and one of the most challenging, and interesting activities for the visitor is to explore which parts are from the Proto-Palatial and which walls have stood since the Neo-palatial periods.

Malia is the third largest Minoan palace, and it is located East of Heraklion near Hersonissos.

While not as extensively reconstructed as Knossos, the archaeological site of Malia is easy to navigate. The ground is relatively flat, so you can stroll pleasantly among the ruins.

Malia is an extensive site that includes the excavated palace, the agora to its north and a settlement a little further west.

Both the palace and the agora are a pleasure to walk through, and they offer a unique view into the everyday life of the common Minoan people who made their living in the proximity of the palace.

The site is near several sandy beaches, so you will probably find the idea of swimming after walking through the ruins irresistible.

There is also a small information center near the palace. It houses a wealth of information alongside photographs of artifacts.

You might want to visit it first because the three-dimensional scale models will help you understand how Malia might have looked during Minoan times.

The drive from Sitia to Kato Zakros is fairly challenging, but the landscape you go through is thoroughly enjoyable.

Kato Zakros consists of few homes and a row of tavernas which line the beach. They mainly serve the tour bus passengers who arrive there for the day, attracted by the Minoan palace ruins which can be found about one hundred meters inland.

Kato Zakros is about an hour’s drive from Sitia. Many opt to reach the palace by a two hour trek from Zakros to Kato Zakros through the spectacular gorge which connects the two villages and is known as the “Valley of the Dead” because of the cave tombs which are carved on its walls.

If you opt for the walk though the gorge, it would be a good idea to arrange for a way to get back to your car afterwards since there is no local transportation anywhere near Kato Zakros.

The palace ruins at Kato Zakros are well worth the visit if enchanted with the Minoan civilization.

It is nested at the hill slopes overlooking the bay, and while it has not been extensively reconstructed, the buildings are well outlined and several features well preserved.

Zakros is the smallest of the known Minoan palaces, about five times smaller than Knossos, and its location nearest the commercial destinations of Egypt, Cyprus and the Middle East transcended it to an important hub for economic and military activity.

Like the other Minoan palaces of Crete, it was built around 1900 BC and most of the ruins date back to the Neopalatial period.

Many of the buildings were multistoried, with interior staircases, and light wells.

Since the palace of Zakros was built on very wet land, water was always an element that needed to be addressed. The palace features a number of drains, a cistern, and a fountain.

The palace was destroyed in 1450 BCE by a fierce fire which baked the clay tablets with the linear A script which have survived to our day.

It would take about two hours to walk leisurely around the ruins. The terrain is difficult since half the palace is built on a steep rocky slope.

On the site, there are no accommodations of any kind, and no shade to be found anywhere.

The Palekastro archaeological site has intrigued archaeologists for years. It is also known as Rousolakos, and is a comparatively small one.

Palekastro is ideally positioned in a fertile land, right next to the harbor of Chiona, at the East coast of Crete, and is blessed with relatively easy access of the inland ancient settlements.

All these facts make it the ideal location for the development of a major town, or a palace.

The town has been unearthed in slow increments, and according to the Radiophotography surveillance of the site, there is evidence of a fifth Minoan palace under the olive roots of the adjacent area.

The stone foundations of the houses are well outlined in the perimeter while several houses are well preserved with walls up to two meters high and with evidence of frescoes on their surface.

As you walk through the ruins you can see the clear contours of wide streets and several deep fresh water wells.

The site is still actively excavated by a horde of diggers and it is interesting to see archaeologist actively contemplating freshly unearthed pottery fragments.

It is also one of the most well documented sites with extensive plans, essays, and graphics erected next to houses and streets.

You can leisurely walk around the site in about one hour, and the site’s proximity to the Chiona beach makes it easy to combine swimming along with a visit to the ancient site. In fact, the entire surrounding area is the perfect place for a few weeks of relaxation with the modern village of Palekastro as base.

Tripitos is a small Hellenistic settlement just outside Sitia atop a low hill which provides spectacular views of the bays below. There is a sign on the main road pointing to it, and once you turn the road is very narrow and steep.

Given the wealth of archaeological sites in Crete, Tripitos would only be on the itinerary of the most hard-core archaeology travelers. It seems like an abandoned site, with no ammenities or information posted.

Itanos is an archaeological excavation at the northeast tip of the island near Vai and Erimoupolis beaches. It was first excavated by Albherr.

There, archaeologists have unearthed a settlement that dates back to prehistoric times, although most of the ruins visible today on site date back to the Hellenistic era, with several Byzantine foundations peering through the ground around the ruins of a Basilica.

Itanos was a large commercial port in ancient times and it reached its zenith during Classical times (480-323 BCE).

The Greek historian Herodotus is the first to mention the town when he described how the fisherman Korovios, who was born in Itanos, led the people of Thera to establish a colony in the shores of Lybia.

Throughout history Itanos appears to retain its autonomy and often is found involved in disputes with surrounding towns. During Roman times the town acquired a special status and it minted its own coins. Its affluence lasted until the Byzantine times and it was abandoned sometime in the 17th century CE.

The archaeological site is found within walking distance from the beautiful beaches we call Erimoupoli.

In fact, many ancient and byzantine stones protrude right into the beaches, and you will see bathers casually sitting on them probably not recognizing that their seat is un-excavated masonry from some ancient building or tomb.

Three low, rocky hills host the three different excavation attempts. The first, visible as you approach the end of the road to Erimoupoli, is the clearly marked and fenced hill to the right.

The hill to the North of this site (to the left as you face the sea) hosts a small Necropolis and you can easily miss it because it is not marked. Several large slabs from ancient graves are scattered about.

Most artifacts from the excavations are exhibited at the Sitia museum.

On the imposing rock that separates the two of the three beaches of Erimoupoli you will mostly see remains from the Byzantine town, along with the well outlined foundations of a large Basilica.

It is not a major site, so there is no reason to travel from afar to visit Itanos unless you are a scholar or happened to be in the area.

From Sitia, Xerokampos is 65 km to the southwest, and a definitely a trip to be made during the day.

The tiny village is completely isolated with only one winding paved road providing access to it through the tall and rugged mountains of the east coast.

he towns main attraction is its isolation from the rest of the world, and a multitude of tiny coves lined with gold sand along the cool waters of the Mediterannean.

The village is tiny with few appartments for rent, a couple of taverns, and several homes, and it becomes completely deserted during the winter months.

There are two ways to get to Xerokampos from Sitia. One road branches off to the right on the way to Zakros, and another one begins around Bori village on the road from Sitia to Makrygialos. The second road is the most scenic.

In Xerokampos, there is a small archaeological site right next to the beach but it is not very well preserved, and it is even less well documented.

Crete is also host to a multitude of Archaic, Classical, Hellenistic, Roman and Byzantine sites.

The most important Classical and Hellenistic sites are the ruins at Gortyn which became the Roman capital of the island, Aptera near Chania, and Lato near Agios Nikolaos.