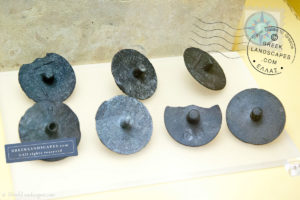 Citizens of Athens invented trial by jury. Each citizen would cast his secret ballot in the form of a disk with an axle. Casting a disk with a solid axle was a vote for acquittal, while a pierced axle signified condemnation. Since the only part that was visible when the ballot was held between the fingers, no one could tell which ballot was cast, ensuring thus secrecy when voting.