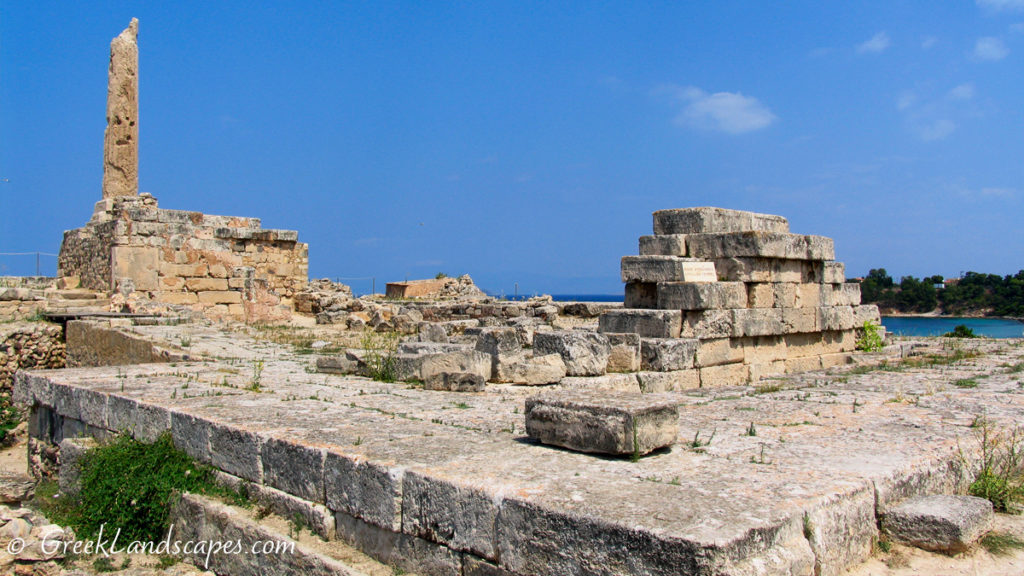 Kolona archaeological site is the ancient location of Aegina town. You may visit it today at the edge of the modern town, a short walk from the port.

Ancient Aegina was an affluent state with considerable power and influence over the entire Mediterranean from Neolithic times all the way through the Classical era.

While the temple of Aphaia is the most popular destination of the island, the ancient ruins to the north of Aegina town, at Kolonna, are a testament to the long history of the island.

The excavations at Kolonna present a complex layer of ruins crowned by the foundations and a lone standing column from the opisthodromos of the Temple of Apollo.

The Temple of Apollo

While difficult to decipher in its present state, it is a Doric temple, built with 6 columns at the front and back, and 12 columns at the flanks (just like the nearby temple of Aphaia).

The Late Archaic temple was built of local poros stone between 520 and 500 BCE and it crowned the city’s acropolis.

Many of the badly damaged fragments from the temple’s sculptural decorations are exhibited at the nearby museum of Aegina. The east pediment depicted a battle scene with Heracles and the Aeginetan hero Telamon against the Amazons.

Other ruins of note are the badly damaged Tomb of Phokos, the shrine of Ajax (Aiakeion), and a small temple of Artemis.

A great deal of the ruins date from the Helladic (Bronze Age) fortified settlement, intermingled with Archaic structures, and later Roman fortifications.

Several Byzantine buildings are also visible; although it would be difficult for the untrained visitor to decipher what era each ruin belongs to, despite the several marble markers that appear near them.

Excavations of the settlement from the Bronze Age (2500-1600 BCE) unearthed ten levels of occupation, with the fortifications of the fifth level (2200-2050 BCE) being the most impressive with tall walls.

This settlement shows evidence of destruction by fire and the next city layer was protected with thicker walls and entrances that were protected by round towers.

The Ancient Harbor of Aegina

The ruins are located right next to the sea and most of the unearthed settlements were protected by an encircling wall. Ancient Aegina had two harbors.

The commercial harbor was located exactly where the modern harbor is today, and just to the north of it the ruins of the “hidden port” or the harbor where the military vessels were docked can be seen under the surface of the sea.

Today’s beach of Aegina coincides with the ancient “hidden port”, and many bathers frolic in the shallow waters unaware that they swim within the confines of the ancient walled harbor.