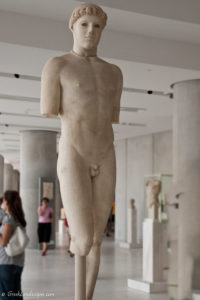 The statue also known as Kritos Euphebe is attributed to the sculptor Kritios, the theater of Myron.

It is a pivotal statue in Greek Art because it shows that the artist’s understanding of the human figure as a system.

It is the precursor to the “athlete” statues that were produced in abundance in Classical Greece.